Use of this site indicates acceptance of the Privacy Policy and Terms of Use.
The information on this Website is not reliable and not intended to provide tax, legal, or investment advice. Nothing contained on the Website shall be considered a recommendation, solicitation, or offer to buy or sell a security to any person in any jurisdiction.
CEO.CA members discuss high-risk penny stocks which can lose their entire value. Only risk what you can afford to lose.
© 2021 - CEO.CA Technologies Ltd.
@newswire/northern-shield-uncovers-further-gold-and-copper-mineralization ↻
0 online
Today This week
Search Subscribe
Members of @newswire/northern-shield-uncovers-further-gold-and-copper-mineralization

OTTAWA, ON, Aug. 31, 2021 /CNW/ - Northern Shield Resources Inc. ("Northern Shield" or the "Company") (TSXV: NRN) is pleased to provide an update on exploration and interpretation from the Root & Cellar Gold-Silver-Copper Project ("Root & Cellar" or the "Project") located on the Burin Peninsula in southeastern Newfoundland. The Company can earn a 100% interest in the Property, which is being explored for epithermal gold-silver mineralization and porphyry copper deposits.

New Gold and Copper Occurrences
Thirty-six additional grab sample assay results have been received from prospecting and ground truthing of some of the near surface IP anomalies in the Conquest Zone as announced on July 27, 2021, including assays of 3.2 and 1.0 g/t Au. Eleven other samples from the batch assayed between 0.1 and 1.0 g/t Au. These results continue to validate the prospectivity of the IP anomalies.

IP Anomaly Continues to Depth
These new discoveries continue to suggest the possibility of a transitional epithermal gold to copper porphyry system occurring at Root & Cellar. Line 5300 was surveyed with two different configurations during the previously completed IP survey, with the second configuration seeing much deeper. It shows the main Conquest IP trend widening and extending to considerable depth, beyond 300 metres (Figure 3). This IP trend will be the principal target to be tested at depth, for a drilling program being planned and permitted for this fall.

"We continue to reap the benefits of being an early mover into the under-explored Burin Peninsula as more and more gold and copper occurrences are uncovered in the Conquest Zone through methodical exploration and ground truthing the near-surface expressions of the IP anomalies. We look forward to the drilling program to test these near surface IP targets and where the IP anomalies blowout below the volcanic sequence."

Geology-IP Interpretation
The geology of the Root & Cellar Property dominantly consists of a bimodal sequence of volcanic rocks with vent breccias and related pyroclastic rocks including ignimbrites. This sequence overlies subvolcanic basement rocks. Only a small number of the IP anomalies identified from the survey penetrate up through the volcanic sequence and come to surface. Those that do come to surface appear to be offshoots of much larger IP anomalies at depth. Importantly, the broadening of the IP anomalies occurs at a stratigraphic level interpreted to be the volcanic/basement contact.

Planned Drilling Program
A 2,500 metre drilling program is planned for the fall and a drill permit application is underway. The drilling will focus on the Conquest Zone but the Windfall Zone, along with IP targets to the south-east of Windfall, will also be tested.

This press release has been reviewed by Christine Vaillancourt, P. Geo. and the Company's Chief Geologist. Samples from the program were analyzed by Eastern Analytical Ltd. of Springdale, Newfoundland for Au by Fire Assay with ICP-AES finish. All standards, blanks and duplicates meet targeted values. 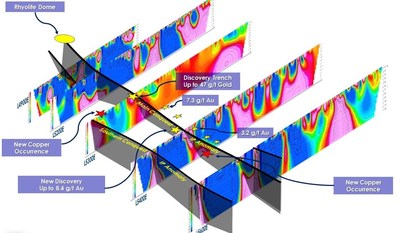