Use of this site indicates acceptance of the Privacy Policy and Terms of Use.
The information on this Website is not reliable and not intended to provide tax, legal, or investment advice. Nothing contained on the Website shall be considered a recommendation, solicitation, or offer to buy or sell a security to any person in any jurisdiction.
CEO.CA members discuss high-risk penny stocks which can lose their entire value. Only risk what you can afford to lose.
© 2021 - CEO.CA Technologies Ltd.
@newswire/northern-shield-updates-exploration-at-its-shot-rock ↻
0 online
Today This week
Search Subscribe
Members of @newswire/northern-shield-updates-exploration-at-its-shot-rock

by @newswire on 15 Jun 2021, 08:32
Northern Shield Updates Exploration at its Shot Rock and Root & Cellar Gold-Silver Projects, in Atlantic Canada

OTTAWA, ON, June 15, 2021 /CNW/ - Northern Shield Resources Inc. ("Northern Shield" or the "Company") (TSXV: NRN) is pleased to provide an update on the third phase of drilling at its Shot Rock Gold Project ("Shot Rock") in Nova Scotia and progress on the geophysical survey at Root & Cellar ("Root & Cellar" or the "Property") in Newfoundland. To date, eight diamond drill holes, 20SR-17 through 20SR-24, have been completed in the Phase 3 drilling program (see Figure 1), totalling just over 3,400 metres. The first four drill-holes were located at the base of the hill in the Highway Zone and although visually prospective quartz veins were intersected (Figure 2a), these were only weakly anomalous in gold. The four drill-holes drilled from the top of the hill intersected abundant crustiform-colloform banded quartz-adularia-pyrite veins (Figure 2b-2c) but were only moderately anomalous in gold with a high of 1.8 g/t Au over 0.8 metres in hole 21SR-21. Twenty-three other samples from these four drill-holes assayed greater than 0.1 g/t Au. A table of assays can be found on the Companies website.

"The complexity of the Highway Zone is proving challenging and I think the next phase of drilling at Shot Rock will likely focus on the Middle Zone, which appears to be more linear and where the higher surface grades are found. However, our priority now is to implement a diamond drill program at Root & Cellar in Newfoundland as soon as possible: the ground IP and resistivity geophysical survey at Root & Cellar is nearly complete and preliminary results from the field look very promising. The raw results suggest that the Conquest Zone continues down-dip to the south and along strike to the east. A parallel chargeability anomaly 200 meters north of Conquest coincides with the location of boulders uncovered by the prospector which assayed up to 26 g/t Au."

Update on Root and Cellar

Approximately three-quarters of the Spectral IP (Induced Polarization) and Resistivity survey has been completed at Root & Cellar. The survey covers the Conquest Zone and the recently discovered Windfall Zone. The results will be used to guide drill-testing of these two zones later this summer. The Company can earn a 100% interest in the Property which is being explored for epithermal gold-silver mineralization and porphyry copper deposits.

Preliminary review of the raw sections shows several IP targets of interest (Figure 3). This includes a chargeability anomaly that is observed on six lines for a strike-length of over 500 meters and coincides with the location of the Conquest trench where channel samples have assayed up to 45 g/t Au. The eastern end of this linear IP target intersects a broad zone of moderately strong chargeability at depth on the last line of the grid at may suggest the accumulation of disseminated sulphides at a geologic contact at this location. Of significance too is a 300 meter long IP anomaly, located 200 meters north of Conquest, that coincides with multiple strong gold in soil anomalies and several gold-bearing boulders with up to 26 g/t Au.

The drilling program at Shot Rock was contracted to Logan Drilling Group based in Stewiacke, Nova Scotia, and is overseen by Christine Vaillancourt, P. Geo., the Company's Chief Geologist and a Qualified Person under National Instrument 43-101. Samples were analyzed by ALS Global in Vancouver, BC, for Au by Fire Assay and multi-elements by four acid digestion and ICP-AES. All standards and duplicates by ALS Global meet targeted values.

The geophysical survey program at Root & Cellar was contracted to Clearview Geophysics of Brampton, Ontario, and is being overseen by Joe Mihelcic, P. Geo. and a qualified person under NI 43-101. This press release has also been reviewed by Christine Vaillancourt, P. Geo., the Company's Chief Geologist.

This news release contains statements concerning the exploration plans, results and potential for epithermal gold deposits, and other mineralization at the Company's Shot Rock and Root & Cellar properties in Atlantic Canada, geological, and geometrical analyses of the properties and comparisons of the properties to known epithermal gold deposits and other expectations, plans, goals, objectives, assumptions, information or statements about future, conditions, results of exploration or performance that may constitute forward-looking statements or information under applicable securities legislation.  Such forward-looking statements or information are based on a number of assumptions, which may prove to be incorrect. 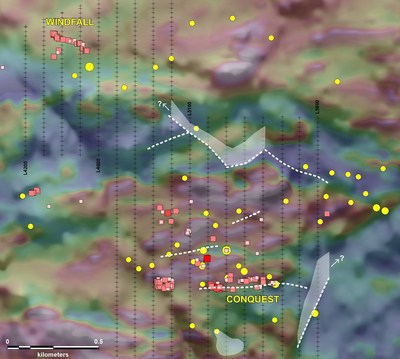