Use of this site indicates acceptance of the Privacy Policy and Terms of Use.
The information on this Website is not reliable and not intended to provide tax, legal, or investment advice. Nothing contained on the Website shall be considered a recommendation, solicitation, or offer to buy or sell a security to any person in any jurisdiction.
CEO.CA members discuss high-risk penny stocks which can lose their entire value. Only risk what you can afford to lose.
© 2016 - Pacific Website Company Inc.
@newswire/northern-shield-updates-ongoing-exploration-at-its ↻
0 online
Today This week
Search Subscribe
Members of @newswire/northern-shield-updates-ongoing-exploration-at-its

OTTAWA, ON, Sept. 8, 2020 /CNW/ - Northern Shield Resources Inc. ("Northern Shield" or the "Company") (TSXV: NRN) is pleased to update progress on Phase 2 drilling and other exploration activities at its Shot Rock Gold Project ("Shot Rock") in Nova Scotia and Root & Cellar in Newfoundland. The Company is exploring for low sulphidation epithermal ("LSE") gold mineralization and, has the right to earn an 80% interest in the Shot Rock Property. 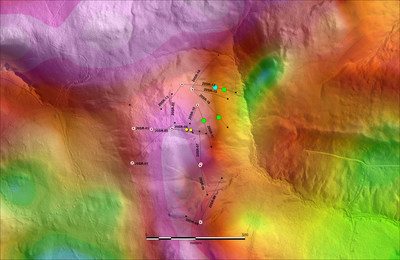 To date, eight diamond drill holes, 20SR-09 through 20SR-16, have been completed in the Phase 2 drilling program (see Figure 1), totalling just over 2,800 metres. Assays for the first six drill holes, 20SR-09 through 20SR-14, have been received, including those for a large quartz vein intersected in drill-hole 20SR-11 (please refer to a Company press release dated July 23, 2020). Similar large intersections of quartz veins and breccias were observed in subsequent drill holes 20SR-12 and 20SR-16. Quartz veins from holes 20SR-11 and 12 returned anomalous gold values with a high of 0.52 g/t Au. Assays are pending for the remaining two drill holes, 20SR-15 and 20SR-16. These large quartz veins coincide with targeted zones of anomalously low magnetic response observed in airborne magnetic data and interpreted to be regions where trace magnetite has been destroyed by hydrothermal fluids associated with the mineralizing hot spring system.

Mineral assemblages observed in large veins encountered in Phase 2 drill holes generally share similarities to the high-grade gold zones intersected in hole 20SR-04 that encountered 2.45 metres of 12.6 g/t Au including 1.0 metre of 17.3 g/t Au within quartz-adularia veining with electrum (native gold-silver alloy), mineralized veining typical of LSE deposits. Recent detailed study of subtle textures and alteration assemblages from the vein encountered in hole 20SR-11 suggests that it is possibly above or on the fringe of the prospective boiling zone where higher gold grades would be expected. The Company therefore plans for more drill testing to test this potential.

"Although the assays from drill-hole SR20-11 did not yield high gold grades, we remain very encouraged by indications of the presence of a large LSE gold system at depth. We know from our first phase of drilling that gold grades can increase significantly over short distances, both laterally and vertically. Now that we are able to identify areas prospective for larger veins from airborne magnetic data, we have to hone in on the boiling zone where we expect to encounter higher gold grades. Recently, Dr. Quinton Hennigh with investor Crescat Capital, has advised us on the merits of using controlled-source audiomagnetotellurics ("CSAMT") to better differentiate areas that may host feeders for the hot spring system. CSAMT data collection will start imminently and will greatly augment vectoring of future drilling. We continue to improve our understanding of this exciting new gold system while recognizing that persistence leads to discovery."
-         Northern Shield President and CEO, Ian Bliss

Through ongoing analysis of infrared data collected from the core, along with other parameters, well-defined patterns of correlation are beginning to emerge that can then be used to vector drilling towards the boiling zone and targeted high-grade gold. Results will be combined with a thorough integration and analysis of all structural data, with the understanding that persistent drilling will be required to vector in on higher-grade gold mineralization. CSAMT geophysical surveys have been used with great success in identifying deep-seated structures associated with high-grade feeder zones in many other LSE systems. A CSAMT geophysical survey is planned to commence as soon as crews become available.

Update on Root and Cellar
Analytical results from the last two batches of soil samples from the Root and Cellar exploration program are expected shortly. Once these have been received, the data will be contoured and interpreted with targets prioritized geophysical surveying followed by drilling. Cursory observations of the data received to date continues to indicate an extensive "gold in soil" anomaly in the Conquest Zone area and a new target area located north of Conquest that contains the highest soil anomaly on the property to date (493 ppb Au).

The drilling program at Shot Rock was contracted to Logan Drilling Group based in Stewiacke, Nova Scotia, and is overseen by Christine Vaillancourt, P. Geo., the Company's Chief Geologist and a Qualified Person under National Instrument 43-101. Samples from both programs were analyzed by ALS Global in Vancouver, BC, for Au by Fire Assay and multi-elements by four acid digestion and ICP-AES (rock) and for multi-elements including Au by aqua-regia digestion with ICP-MS (till). All standards and duplicates by ALS Global meet targeted values.