Use of this site indicates acceptance of the Privacy Policy and Terms of Use.
The information on this Website is not reliable and not intended to provide tax, legal, or investment advice. Nothing contained on the Website shall be considered a recommendation, solicitation, or offer to buy or sell a security to any person in any jurisdiction.
CEO.CA members discuss high-risk penny stocks which can lose their entire value. Only risk what you can afford to lose.
© 2016 - Pacific Website Company Inc.
@newswire/petro-victory-energy-corp-announces-commercial-oil ↻
0 online
Today This week
Search Subscribe
Members of @newswire/petro-victory-energy-corp-announces-commercial-oil

/NOT FOR DISTRIBUTION TO U.S. NEWSWIRE SERVICES OR FOR DISSEMINATION IN THE UNITED STATES. ANY FAILURE TO COMPLY WITH THIS RESTRICTION MAY CONSTITUTE A VIOLATION OF U.S. SECURITIES LAWS/

CALGARY, AB, Nov. 19, 2020 /CNW/ - Petro-Victory Energy Corp. (TSXV: VRY) ("Petro-Victory" or "Company") is delighted to announce that it has commenced commercial production at the São João oil field in the State of Maranhão, Brazil. 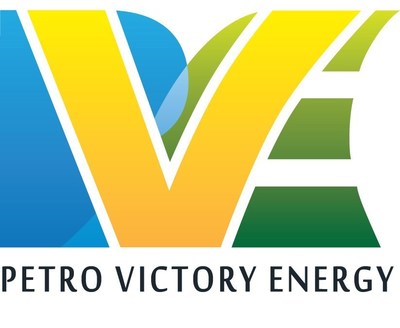 As previously announced, Petro-Victory acquired a 50% working interest in the São João oil field in Q4 2019 for a total cost of R$500,000 (approximately US$93,000 at current exchange rate). The São João field produced 87,500 BO cumulative intermittently between 1984-1988 from 4 wells and has been abandoned in excess of 30 years.

In Q4 2019 and Q1 2020 the Company, with its operating partner Oeste de Canoas Petróleo e Gás Ltda, installed production facilities at the field area, including storage tanks, flow lines, road access, and general civil and mechanical work. A workover rig was mobilized in Q2 2020 to commence production testing. In November, the field is currently averaging production of  70 BOPD (35 BOPD net to Petro-Victory) from 3 wells (SJ-01, SJ-06, and SJ-11), and production is expected to increase in the short-term following the installation of artificial lift systems at the SJ-01 and SJ-11 wells.

The Company has re-entered 3 suspended oil wells (SJ-01, SJ-06, and SJ-11) and completed oil production testing in line with its work program commitments with the Agencia Nacional do Petroleo Gas Natural e Biocombustiveis of Brazil ("ANP").

The SJ-01 well was re-entered and brought online without artificial lift and has produced over 3,000 barrels of 36o API light oil over a 6-month period until October 2020. The well was tested over 3 periods, 11 days in April, 12 days in May, and 11 days in June, and was put online on the 9th July with continuous natural flow and has since averaged 8 BOPD during this period.

The SJ-06 well was re-entered and tested and has produced over 2,800 barrels of 36o API light oil over a 5-month period until October 2020. The well was tested for 9 days in May and 26 days in June, and 34 days across July and August. The SJ-06 well was suspended on the 11th August to install a progressive cavity pump (PCP) system to provide artificial lift. SJ-06 is currently averaging 35 BOPD since resuming production and the workover rig has now been mobilized to SJ-11 for production testing.

The SJ-11 well was re-entered for testing and was brought online on 26th October without artificial lift. In the period between 26th October and 15th November the well has averaged 46 BOPD. Due to the strong production performance from SJ-11 the well will be allowed to produce without artificial lift until the end of November, when SJ-11 will be temporarily suspended to install a progressive cavity pump (PCP) system to provide artificial lift. The SJ-11 well is geologically similar to the SJ-06 well and is expected to perform in a comparable fashion when installed with the PCP system

An updated development plan for the São João field has been submitted to the ANP at their request following the declaration of commerciality and the commencement of commercial production resulting from the successful workovers at SJ-01, SJ-06, and SJ-11. On approval, the Company will announce any future additional work program items and will keep the market updated on the progress at the upcoming workovers on SJ-11 and SJ-01.

Petro-Victory has achieved payback of initial acquisition cost and capital expenditures at the São João field and is netting back US$30 per barrel with oil sales attracting a US$5 premium to Brent pricing (average November oil sales priced at US$45 per barrel when Brent was US$40 per barrel). With production set to increase in the short-term with the completion of the pumping units at SJ-01 and SJ-11, the São João field has been a highly successful first production operation for the Petro-Victory team.

The Company is currently in the process of applying for workover and drilling permits for its 100% working interest field, Andorinha, and will update shareholders on the progress at this field in the near future. Net production in the month of November across the Petro-Victory portfolio is currently averaging 52 BOPD (35 BOPD at São João, 4.5 BOPD at Carapitanga, and 12.5 BOPD at Andorinha).

Work will be focused initially on the São João and Andorinha fields to increase production, as well as plans to bring online the 100% owned Alto Alegre and Trapia fields in the short-term, in addition to performing workovers at the producing Carapitanga field.

Richard F. Gonzalez, Chief Executive Officer of Petro-Victory commented, "The commercial oil production of our first 3 workovers at the São João oil field demonstrates the successful execution of Petro-Victory's business model of profitably producing oil in onshore Brazil.  The cash proceeds, generated from the previously announced sale of non-operated assets, will fund the robust 2021 work program across our portfolio of oil fields."

Petro-Victory Energy Corp. is engaged in the acquisition, development, and production of crude oil and natural gas resources in Brazil. The company is a certified onshore and shallow water operator in Brazil and holds working interests in twenty (20) licenses totaling 129,771 acres in three (3) oil producing basins in Brazil, and a royalty agreement in a 2-million-acre concession in Paraguay. Petro-Victory generates accretive shareholder value through disciplined investments in high impact, low risk assets. The Company's Common Shares trade on the TSX Venture Exchange ("TSXV") under the ticker symbol VRY.v.

Neither the TSXV nor its Regulation Services Provider (as that term is defined in the policies of the TSXV) accepts responsibility for the adequacy or accuracy of this release.

Specifically, this press release contains forward-looking statements relating to but not limited to: our business strategies, plans and objectives, and drilling, testing and exploration expectations. These forward-looking statements are based on certain key assumptions regarding, among other things: our ability to add production and reserves through our exploration activities; the receipt, in a timely manner, of regulatory and other required approvals for our operating activities; the availability and cost of labor and other industry services; the continuance of existing and, in certain circumstances, proposed tax and royalty regimes; and current industry conditions, laws and regulations continuing in effect (or, where changes are proposed, such changes being adopted as anticipated). Readers are cautioned that such assumptions, although considered reasonable by Petro-Victory at the time of preparation, may prove to be incorrect.

Actual results achieved will vary from the information provided herein as a result of numerous known and unknown risks and uncertainties and other factors. These and additional risk factors are discussed in our Final Prospectus dated July 11, 2014, as filed with Canadian securities regulatory authorities at www.sedar.com.