Use of this site indicates acceptance of the Privacy Policy and Terms of Use.
The information on this Website is not reliable and not intended to provide tax, legal, or investment advice. Nothing contained on the Website shall be considered a recommendation, solicitation, or offer to buy or sell a security to any person in any jurisdiction.
CEO.CA members discuss high-risk penny stocks which can lose their entire value. Only risk what you can afford to lose.
© 2022 - CEO.CA Technologies Ltd.
@newswire/sable-intercepts-5928-gt-ageq-over-05m-within-3536 ↻
0 online
Today This week
Search Subscribe
Members of @newswire/sable-intercepts-5928-gt-ageq-over-05m-within-3536

VANCOUVER, BC, Feb. 15, 2022 /CNW/ - Sable Resources Ltd. ("Sable" or the "Company") (TSXV: SAE) (OTCQB: SBLRF) is pleased to announce additional results from Phase II diamond drilling campaign at the El Fierro Project.  El Fierro is a historic artisanal silver rich mining district located 250 km northwest of San Juan city.  Sable completed the first drilling campaign ever conducted at El Fierro in May 2021 with a total of 3,278 metres in 25 drill holes, reporting multiple high-grade intercepts and the identification of >14.5 kilometres of veins.  So far, Sable has drill tested portions of the Fierro Bajo, Fierro Alto, La Verde, and Lagunitas vein systems. The current Phase II drill program commenced in late October 2021 and by mid December had completed 3,630 metres in 31 drill holes.  The campaign focuses on reconnaissance drilling to determine the full strike extension of the La Verde and Lagunitas vein systems and to confirm vertical continuity down to at least 250 metres. In addition, Sable is conducting some extra drilling on Fierro Bajo, and first pass drilling over other known veins.

Sable has received results from two drill holes, while 12 additional drillholes are currently being analyzed by ALS Minerals.

Ruben Padilla, President and CEO of Sable stated, "These continuing positive drill hole results confirm that the La Verde vein is a high priority in our ongoing drilling program and the El Fierro project." 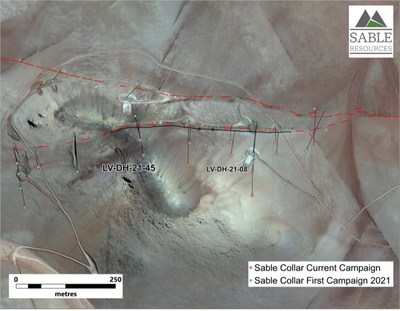 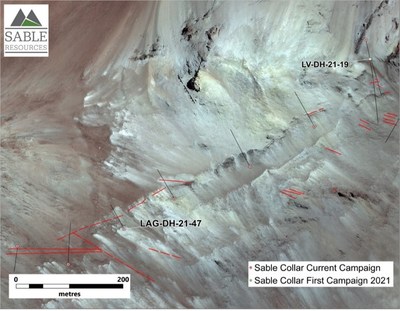 Mineralization intercepted in the reported drill holes represents between 60% and 90% true width. Maps and tables associated with this press release will be available on Sable's website (www.sableresources.com). Silver equivalent (AgEq) is calculated based on 100% recovery and prices of USD 18 per oz for silver; USD 1,500 per oz for gold; USD 0.85 per pound for lead; USD 1.1 per pound for zinc; and USD 3.0 per pound for copper. Cu, Pb, Zn values lower than 0.1%, and Au values lower than 0.1 g/t have not been considered within the AgEq calculation.

The El Fierro Project is located 250 km northwest of San Juan, Argentina and 120 km north of Sable's Don Julio Project in one of the best-known historical mining districts in the San Juan province. The El Fierro Project consists of four main known mineralized areas - Fierro Alto, Fierro Bajo, La Verde and Lagunitas over an area of 8.6 km x 6.2 km.  Three of the four areas host a number of old artisanal mining workings where silver, lead and zinc were intermittently mined since the late 1800's until the 1960s.  Prior to Sable's 2021 drill program, the Property had never been drilled.  Sable currently controls 58,510 hectares covering all the historically mineralized areas and additional highly prospective ground over a large magnetic anomaly.

Sample preparation for projects in Argentina is carried out by ALS Chemex Argentina, a subsidiary of ALS Minerals, at its facility located in Mendoza, Argentina. Analyses are carried out at their laboratory in Lima, Peru. Sample preparation includes drying in an oven at a maximum temperature of 60°C, fine crushing of the sample to at least 70% passing less than 2 mm, sample splitting using a riffle splitter, and pulverizing a 250 g split to at least 85% passing 75 microns (code PREP-31).