Use of this site indicates acceptance of the Privacy Policy and Terms of Use.
The information on this Website is not reliable and not intended to provide tax, legal, or investment advice. Nothing contained on the Website shall be considered a recommendation, solicitation, or offer to buy or sell a security to any person in any jurisdiction.
CEO.CA members discuss high-risk penny stocks which can lose their entire value. Only risk what you can afford to lose.
© 2016 - Pacific Website Company Inc.
@newswire/semafo-and-savary-announce-definitive-combination-agreement ↻
0 online
Today This week
Search Subscribe
Members of @newswire/semafo-and-savary-announce-definitive-combination-agreement

MONTREAL and TORONTO, March 11, 2019 /CNW Telbec/ - SEMAFO Inc. (TSX: SMF) (OMX: SMF) ("SEMAFO") and Savary Gold Corp. (TSX-V: SCA) ("Savary") are pleased to announce that they have entered into a definitive combination agreement (the "Combination Agreement") pursuant to which SEMAFO will acquire all of the issued and outstanding common shares of Savary (the "Savary Shares") not already owned by it. The transaction is being carried out by way of a three-cornered amalgamation (the "Amalgamation"). Savary shareholders will vote on the Amalgamation at a special meeting of Savary shareholders (the "Savary Meeting") with closing expected to take place by the end of April 2019.

Under the terms of the Combination Agreement, Savary shareholders will receive 0.0336 of a SEMAFO common share (the "SEMAFO Shares") for each Savary Share (the "Exchange Ratio"). The Exchange Ratio is the same as was announced on February 11, 2019. All of Savary management and board and significant shareholders, together representing 29.3% of the Savary Shares, are supportive of the combination and have entered into support agreements (collectively, the "Support Agreements") with SEMAFO to vote their Savary Shares in favour of the Amalgamation. 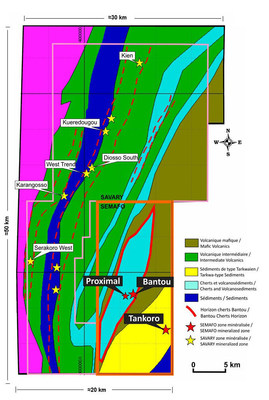 Benoit Desormeaux, President and CEO of SEMAFO, stated "Our acquisition of the Karankasso property reflects our core strategy of creating long-term value through developing and operating high quality assets. The acquisition provides a consolidated district-scale land package in a country we know well and on the prolific Houndé Greenstone Belt, which we also know very well. We see excellent potential for resource growth on the combined 1,250 km², and when this transaction is consummated we anticipate the combined property will head up our development pipeline."

Don Dudek, President and CEO of Savary, said, "Over the past few years, Savary has delivered on its commitment to create value for its shareholders through its disciplined approach to exploration and resource development. The transaction with SEMAFO is consistent with that commitment as our shareholders will benefit from having ownership in an intermediate, multi-mine producer with a portfolio of high-quality assets and a proven and experienced management team that shares our commitment to creating long-term sustainable value. On closing, our shareholders can maintain exposure to the district-scale land package as it becomes one of SEMAFO's top development pipeline projects."

The Combination Agreement follows the announcement by way of a joint press release dated February 11, 2019 that SEMAFO and Savary had entered into a non-binding letter of intent in respect of a proposed acquisition of Savary by SEMAFO.

Subject to TSX Venture Exchange, Toronto Stock Exchange (the "TSX") and any other required regulatory authority approval, outstanding Savary options and warrants will be exercisable in accordance with their terms into SEMAFO Shares at the Exchange Ratio until their expiry date.

Implementation of the Amalgamation is subject to approval by (i) at least two-thirds of the votes cast by all Savary shareholders and (ii) a simple majority of the votes cast by Savary shareholders other than SEMAFO, all at the Savary Meeting. In addition to shareholder approval, completion of the Amalgamation is subject to the receipt of regulatory approvals, including stock exchange approvals, as well as certain other closing conditions customary in transactions of this nature.

The Combination Agreement contains customary non-solicitation provisions which are subject to Savary's right to consider and accept a superior proposal subject to a matching right in favour of SEMAFO. In the event that the Amalgamation is not completed as a result of a superior proposal or in certain specified circumstances, Savary will pay SEMAFO a termination fee in the amount of $750,000.

SEMAFO currently owns approximately 15.5% of the issued and outstanding Savary Shares. As such, SEMAFO is considered a "related party" of Savary in respect of the Amalgamation and the Amalgamation is considered to be a "business combination" for Savary pursuant to Multilateral Instrument 61-101 – Protection of Minority Security Holders in Special Transactions ("MI 61-101"). Savary will therefore seek approval of the Amalgamation from disinterested Savary shareholders at the Savary Meeting, as required by section 5.6 of MI 61-101. Savary is relying on the formal valuation exemption in section 5.5(b) of MI 61-101, on the basis that no securities of Savary are listed on the TSX or other specified markets. Full details of the Amalgamation will be included in the management information circular to be filed with regulatory authorities and mailed to the Savary shareholders in accordance with applicable securities laws. The record date for the Savary Meeting will be announced in the near future.

If the Amalgamation is completed, the Savary Shares will be delisted from the TSX Venture Exchange.

A copy of the Combination Agreement will be available through Savary's and SEMAFO's filings with the applicable securities regulatory authorities in Canada on SEDAR at www.sedar.com.

SEMAFO is a Canadian-based intermediate gold producer with over twenty years' experience building and operating mines in West Africa. The Corporation operates two mines, the Boungou and Mana Mines in Burkina Faso. SEMAFO is committed to building value through responsible mining of its quality assets and leveraging its development pipeline.

Savary is a Canadian exploration company focused on exploring and developing the Karankasso Gold Project in Burkina Faso. The Company holds an approximate 75.2% deemed joint venture ownership at year end 2018 and is the operator of the joint venture. The project is located within the Houndé Greenstone Belt, which hosts SEMAFO's Mana mine, Roxgold's Yaramoko Mine and Endeavor's Houndé Mine. The project contains an inferred mineral resource estimate (November 2, 2017) of 12.3 million tonnes (Mt) grading 2.03 g/t gold for 805,000 ounces. For additional information please visit www.savarygold.com.

Don Dudek, P.Geo., President and CEO of Savary and a Qualified Person under National Instrument 43-101, has reviewed and approved the Savary scientific and technical information contained in this press release.

Richard Roy P. Geo, Vice-President Exploration of SEMAFO and a Qualified Person under National Instrument 43-101, has reviewed and approved the SEMAFO scientific and technical information contained in this press release.

Notice to Savary Shareholders in the United States

This business combination is made for the securities of a foreign company. The offer is subject to disclosure requirements of a foreign country that are different from those of the United States. Financial statements to be included in the Savary management information circular, if any, have been prepared in accordance with International Financial Reporting Standards as issued by the International Accounting Standards Board, that may not be comparable to the financial statements of United States companies.

It may be difficult for you to enforce your rights and any claim you may have arising under the federal securities laws, since each of SEMAFO and Savary is incorporated in a province of Canada, and some or all of their respective officers and directors are residents of Canada. You may not be able to sue either SEMAFO or Savary or their officers or directors in a foreign court for violations of the U.S. securities laws. It may be difficult to compel SEMAFO or Savary or their respective affiliates to subject themselves to a U.S. court's judgment.

Copies of the Savary management information circular (including any documents to be incorporated therein), Combination Agreement and certain other reports or information related to the Amalgamation will be made available through SEMAFO's filings with the United States Securities and Exchange Commission at www.sec.gov.

Factors that could cause future results or events to differ materially from current expectations expressed or implied by the forward-looking statements include, without limitation, significant transaction costs or unknown liabilities;  economic, competitive, political and social uncertainties; the state of capital markets; risks relating to (i) the ability of the parties to satisfy the closing conditions of the Combination Agreement, (ii) the ability of the Savary Board to consider and approve a superior proposal for Savary prior to the completion of the Amalgamation, (iii) failure to receive the necessary shareholder or regulatory approvals where applicable, or failure of the parties to obtain such approvals or satisfy such conditions in a timely manner, (iv) unforeseen challenges in integrating the businesses of Savary and SEMAFO, (v) failure to realize the anticipated benefits of the Amalgamation, (vi) the business, operational and/or financial performance or achievements of Savary or SEMAFO may be materially different from that currently anticipated, (v) other unforeseen events, developments, or factors causing any of the aforesaid expectations, assumptions, and other factors ultimately being inaccurate or irrelevant. In particular, the benefits anticipated in respect of the Amalgamation are based on the current business, operational and financial position of each of SEMAFO and Savary, which are subject to a number of risks and uncertainties. Readers are cautioned that the foregoing list of risks, uncertainties and assumptions are not exhaustive. In addition, if the Amalgamation is not completed, and Savary continues as an independent entity, there are risks that the announcement of the Combination Agreement and the dedication of substantial resources of SEMAFO and Savary to the completion of the Amalgamation could have an impact on each of their respective businesses and strategic relationships (including with regulatory bodies, future and prospective employees, customers, suppliers and partners), operating results and activities in general, and could have a material adverse effect on each of their current and future operations, financial condition and prospects. Consequently, the reader is cautioned not to place undue reliance on the forward-looking statements and information contained in this press release. The forward-looking statements in this press release reflect SEMAFO and Savary's expectations on the date hereof and are subject to change thereafter.

You can find further information with respect to these and other risks in filings made with the Canadian securities regulatory authorities and available at www.sedar.com. SEMAFO's and Savary's documents are also available on their respective websites at www.semafo.com and www.savarygold.com. We disclaim any obligation to update or revise these forward-looking statements, except as required by applicable law.