Use of this site indicates acceptance of the Privacy Policy and Terms of Use.
The information on this Website is not reliable and not intended to provide tax, legal, or investment advice. Nothing contained on the Website shall be considered a recommendation, solicitation, or offer to buy or sell a security to any person in any jurisdiction.
CEO.CA members discuss high-risk penny stocks which can lose their entire value. Only risk what you can afford to lose.
© 2016 - Pacific Website Company Inc.
@newswire/vizsla-drills-1544-gt-silver-eq-over-82-metres ↻
1 online
Today This week
Search Subscribe
Members of @newswire/vizsla-drills-1544-gt-silver-eq-over-82-metres

VANCOUVER, BC, June 24, 2020 /CNW/ - Vizsla Resources Corp. (TSX-V: VZLA) ("Vizsla" or the "Company") is pleased to announce the first drilling results from the Napoleon Vein Corridor at the Panuco silver-gold district in Mexico. Five holes have been completed to date and results have been received for the mineralized intervals of two holes, NP-20-02 and NP-20-03, with high grade intercepts returned.  The company has restarted exploration and currently has two drill rigs operating on the property.

"This news can't come at a better time as silver and gold have been breaking out and the Napoleon results mark our first major high-grade discovery at Panuco. The broad high-grade mineralization in drill hole NP-20-02 attest to the significant potential at the underexplored district. The Company is now fully financed with over C$6 million in the bank and has two drill rigs turning at the project with more results pending. stated President and CEO, Michael Konnert.

Vice President of Exploration Charles Funk commented "These results are a very exciting discovery for Vizsla with multiple veins intersected in drilling containing very high-grade silver, gold and base metals.  These holes are the first ever drilled on the Napoleon vein which extends over more than 2 km of strike and hosts multiple small-scale mines and mineralized outcrops. Drilling is ongoing with two deeper holes and a hole in progress 60m to the north of NP-20-03, all which have each intersected veins.  Vizsla is continuing to step out to expand and define the footprint of mineralization at Napoleon".

The Napoleon Vein Corridor is located almost entirely on concessions optioned from Rio Panuco which Vizsla has the right to purchase 100% of including the 500 tonne per day El Coco mill, tailings facility, roads, power and permits for a total of US$23,000,000.

Table 1:           Downhole drill intersections from the holes completed at the Napoleon Vein, Panuco.

The Napoleon corridor is hosted in weakly magnetic fine-grained diorite and trends approximately north – south.  The structure hosts two main quartz veins that are separated by some 10 to 20m metres and appears to dip very steeply to sub-vertical.  So far it has been mapped along strike for over 2,000 m.  Between the two main veins are a series of smaller splay veins with variable orientations, that are related to dilation along the structure under strike slip movement. 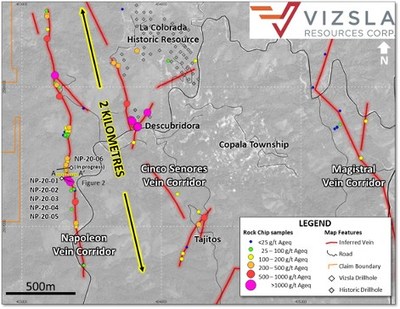 The two main veins are multi-episodal quartz veins, with sections of massive white to greyish quartz as well as local brecciation with clasts of grey quartz, white vein quartz and / or wallrock pieces.  The greyish quartz is grey due to the presence of the very fine-grained silver rich sulphide mineral argentite.  A later breccia cuts these earlier phases comprising grey quartz supporting polymictic clasts of grey and white quartz along with strong chlorite and common to abundant, fine to medium grained pyrite, sphalerite and galena.

The main high-grade hangingwall vein intersected in holes NP-20-02 and NP-20-03 has a true width of between 3.4-5.3 metres.  Other veins intersected require further drilling to confirm true widths as they may equally represent parallel veins or high angle structures to the hanging wall vein.

Hole NP-20-01 failed to reach the target depth when it intersected a void that is likely a decline built at the southern end of the historic Napoleon Mine.  The mine workings are inaccessible preventing present day sampling; however, the mine is believed to have been worked up to a depth of 50m below surface.

Hole NP-20-02 was drilled at a steeper angle and was the first intersection of the Napoleon veins.  Hole NP-20-03 was angled to the north and intersected the veins 30 metres to the north of hole NP-20-02.  Results from both veins are reported in this new release.

The drill rig has been moved north and is drilling beneath the old Napoleon mine in hole NP-20-06.  The hole is currently in progress and has intersected veins 60m to the north of hole NP-20-03. 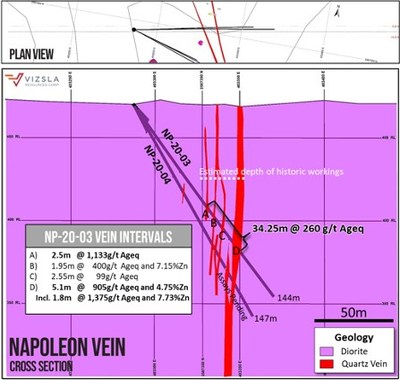 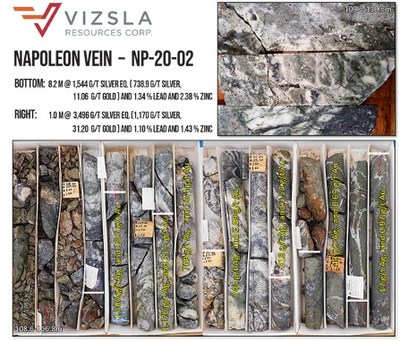 Drill core and rock samples were shipped to ALS Limited in Zacatecas, Zacatecas, Mexico and in North Vancouver, B.C. Canada for sample preparation and for analysis at the ALS laboratory in North Vancouver.  The ALS Zacatecas and North Vancouver facilities are ISO 9001 and ISO/IEC 17025 certified. Silver and base metals were analyzed using a four-acid digestion with an ICP finish and gold was assayed by 30-gram fire assay with atomic absorption ("AA") spectroscopy finish. Overlimits analyses for silver, lead and zinc were re-assayed using an ore-grade four-acid digestion with AA finish.

Panuco's disclosure of technical or scientific information in this press release has been reviewed and approved by Stewart Harris, P.Geo., an independent consultant for the Company. Mr. Harris is a Qualified Person as defined under the terms of National Instrument 43-101.

This news release includes certain "Forward–Looking Statements" within the meaning of the United States Private Securities Litigation Reform Act of 1995 and "forward–looking information" under applicable Canadian securities laws. When used in this news release, the words "anticipate", "believe", "estimate", "expect", "target", "plan", "forecast", "may", "would", "could", "schedule" and similar words or expressions, identify forward–looking statements or information. These forward–looking statements or information relate to, among other things: the development of Panuco, including potential drill targets; future mineral exploration, development and production including the identification of drill targets and commencement of drilling; and completion of a maiden drilling program

Forward–looking statements and forward–looking information relating to any future mineral production, liquidity, enhanced value and capital markets profile of Vizsla, future growth potential for Vizsla and its business, and future exploration plans are based on management's reasonable assumptions, estimates, expectations, analyses and opinions, which are based on management's experience and perception of trends, current conditions and expected developments, and other factors that management believes are relevant and reasonable in the circumstances, but which may prove to be incorrect. Assumptions have been made regarding, among other things, the price of silver, gold and other metals; costs of exploration and development; the estimated costs of development of exploration projects; Vizsla's ability to operate in a safe and effective manner and its ability to obtain financing on reasonable terms.

These statements reflect Vizsla's respective current views with respect to future events and are necessarily based upon a number of other assumptions and estimates that, while considered reasonable by management, are inherently subject to significant business, economic, competitive, political and social uncertainties and contingencies. Many factors, both known and unknown, could cause actual results, performance or achievements to be materially different from the results, performance or achievements that are or may be expressed or implied by such forward–looking statements or forward-looking information and Vizsla has made assumptions and estimates based on or related to many of these factors. Such factors include, without limitation: satisfaction or waiver of all applicable conditions to closing of the Acquisition including, without limitation, receipt of all necessary approvals or consents and lack of material changes with respect to Vizsla and Canam and their respective businesses, all as more particularly set forth in the Acquisition agreement; the synergies expected from the Acquisition not being realized; business integration risks; fluctuations in general macro–economic conditions; fluctuations in securities markets and the market price of Vizsla's common shares; and the factors identified under the caption "Risk Factors" in Vizsla's management discussion and analysis. Readers are cautioned against attributing undue certainty to forward–looking statements or forward-looking information. Although Vizsla has attempted to identify important factors that could cause actual results to differ materially, there may be other factors that cause results not to be anticipated, estimated or intended. Vizsla does not intend, and does not assume any obligation, to update these forward–looking statements or forward-looking information to reflect changes in assumptions or changes in circumstances or any other events affecting such statements or information, other than as required by applicable law.