Use of this site indicates acceptance of the Privacy Policy and Terms of Use.
The information on this Website is not reliable and not intended to provide tax, legal, or investment advice. Nothing contained on the Website shall be considered a recommendation, solicitation, or offer to buy or sell a security to any person in any jurisdiction.
CEO.CA members discuss high-risk penny stocks which can lose their entire value. Only risk what you can afford to lose.
© 2016 - Pacific Website Company Inc.
@newswire/vizsla-makes-fourth-discovery-drilling-3581-gt-silver ↻
0 online
Today This week
Search Subscribe
Members of @newswire/vizsla-makes-fourth-discovery-drilling-3581-gt-silver

VANCOUVER, BC, Sept. 3, 2020 /CNW/ - Vizsla Resources Corp. (TSXV: VZLA) (OTCQB: VIZSF) (Frankfurt: 0G3) ("Vizsla" or the "Company") is pleased to announce a fourth new discovery with the Company's first drill holes into the Tajitos vein on the Cinco Senores Vein Corridor at the Panuco silver-gold project ("Panuco" or the "Project") in Mexico. A total of four holes have been completed to date into the Tajitos vein, located 900 metres southeast of the first Napoleon discovery with results from the first three holes reported in this release.  The Tajitos vein appears to have seen significant mine development but has never previously been drilled. 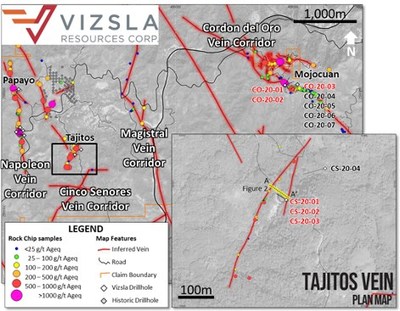 Vizsla President and CEO, Michael Konnert, commented: "The Company has now made four high-grade discoveries since July 2020. The Tajitos discovery is the latest demonstration of the Panuco district's potential. Vizsla is in a solid position to unlock significant value in a district that has never seen systematic exploration.  Vizsla is well funded with over C$30M in the bank to explore veins which have never been mapped, sampled, or drilled, like Napoleon and Cordon del Oro. We are actively stepping out on the four discoveries to expand the footprint of mineralization at each area."

The Tajitos vein is northeast trending vein on the Cinco Senores Vein Corridor (Figure 1).  The vein has been sampled over 360 m of strike with consistent mineralization and drilling targeted beneath former workings that are believed to have been productive.  Workings have continued to greater depths than previously understood and reported intersections in holes CS-20-01 and CS-20-02 are residual vein not exploited by earlier mining.

The Tajitos vein zone is composed of a quartz breccia vein with an early white locally banded quartz supporting andesite lithic clasts, followed by a later white to greyish quartz supporting brecciated clasts of earlier white quartz veins.  This zone was then cut by a later white to clear quartz vein with local dark bands or patches of fine-grained sulphides that is cutting a zone of quartz psuedomorphs after bladed calcite and pink rhodochrosite.  The better grades are in the earlier breccias associated with dark bands or dark patches of very fine-grained disseminated sulphides.  This vein zone is hosted in a package of andesite flows and tuffs that is variably magnetic.

Vizsla has also completed seven holes at the Mojocuan prospect at Cordon del Oro (Figure 1).  The results reported in this release show excellent vein widths with largely low-to medium silver and gold grades.  The Company is continuing to drill in this area vectoring towards higher grade mineralization.  Holes CO-20-01 and CO-20-02 where drilled from the footwall due to topography restrictions which combined with the vein dipping shallower than measured on surface resulted in drilling intersecting the vein at a very high angle.  Holes CO-20-03 to CO-20-07 were drilled from the hangingwall side and are better representations of the vein thickness.

The Mojocuan vein zone is composed of multiphase hydrothermal quartz breccia veins with an early white locally banded quartz supporting rhyolite tuff lithic clasts, followed by a later white to greyish quartz supporting brecciated clasts of earlier white quartz veins.  This zone was then fractured again due to continued movement of the principal fault and wide zones of crackle breccia with associated pervasive silicification were developed.  Better grades are in the breccias associated with local weak dark bands or dark patches of very fine-grained disseminated sulphides.  This vein zone is hosted in a package of felsic to andesite flows and tuffs, with the main Cordon del Oro normal fault being the west side of the Animas graben.  The mineralized zone is up to 25 m wide in true width.

Appointment of Director of Geology

The Company is pleased to announce that Martin Dupuis has been appointed Director of Geology of Vizsla. Martin has over 25 years of mine geology and exploration experience primarily in precious metals, including 10 years in Latin America. Martin was previously the Director of Geology with Pan American Silver, Technical Services Manager with Aurico Gold, and Chief Geologist at several operations.

Mr Dupuis holds a BSc in Geology from Brock University and an MBA degree from the Beedie School of business. He is a P. Geo registered with EGBC.

In conjunction with his appointment, Mr Dupuis has been granted 75,000 options at a strike price of $1.76 which will vest immediately. The options are exercisable for a period of five years from the date of the grant and are subject to the policies of the TSX Venture Exchange.

In addition, Vizsla has engaged Native Ads Inc. to execute a comprehensive digital media marketing campaign for the Company.  This programmatic digital advertising campaign will run for a 12-month period at a cost of approx. C$200,000.00 (payable in cash) and is to include content creation, web development, media buying and distribution, advertising creative development, campaign reporting and optimization.  Neither Native Ads nor any of its directors and officers own any securities of the Company.

The Company's disclosure of technical or scientific information in this press release has been reviewed and approved by Stewart Harris, P.Geo., an independent consultant for the Company. Mr. Harris is a Qualified Person as defined under the terms of National Instrument 43-101.

This news release includes certain "Forward–Looking Statements" within the meaning of the United States Private Securities Litigation Reform Act of 1995 and "forward–looking information" under applicable Canadian securities laws. When used in this news release, the words "anticipate", "believe", "estimate", "expect", "target", "plan", "forecast", "may", "would", "could", "schedule" and similar words or expressions, identify forward–looking statements or information. These forward–looking statements or information relate to, among other things: the development of Panuco, including drilling activities; future mineral exploration, development and production; and completion of a maiden drilling program. 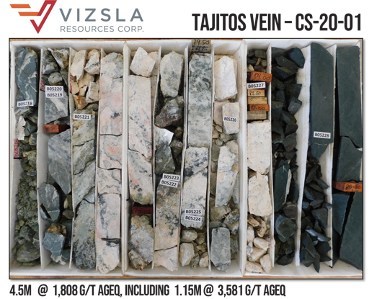 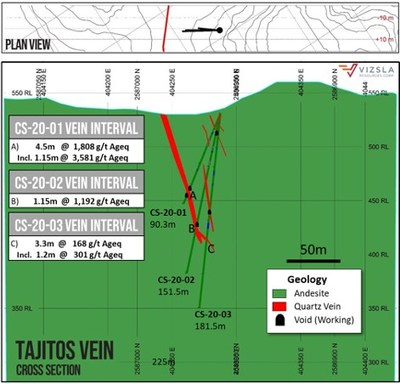