Use of this site indicates acceptance of the Privacy Policy and Terms of Use.
The information on this Website is not reliable and not intended to provide tax, legal, or investment advice. Nothing contained on the Website shall be considered a recommendation, solicitation, or offer to buy or sell a security to any person in any jurisdiction.
CEO.CA members discuss high-risk penny stocks which can lose their entire value. Only risk what you can afford to lose.
© 2022 - CEO.CA Technologies Ltd.
@newswire/vizsla-silver-expands-napoleon-vein-to-2500-metres ↻
0 online
Today This week
Search Subscribe
Members of @newswire/vizsla-silver-expands-napoleon-vein-to-2500-metres

"The most critical aspect of these results is that the mineralized zone at Napoleon has now grown over 350 metres since the last update, with the continuation of a wide, high grade vein to the south," commented Michael Konnert, President and CEO.  "This reinforces our local exploration model of a high-grade, precious metal-rich core developed along strike and down plunge to the south, beneath the Ojo de Agua sub-zone, which remains a primary target for near-term resource growth at Napoleon.  Twenty-two of these drillholes were completed after the resource data cut-off, further demonstrating the potential for the Napoleon resource to increase in size. To aid in ongoing resource expansion and conversion, the Company has added a directional diamond drill, allowing for faster and cheaper targeted drilling of these down-dip extensions and looks forward to continuing to provide updates on the expansion of the Napoleon resource over the next few months." 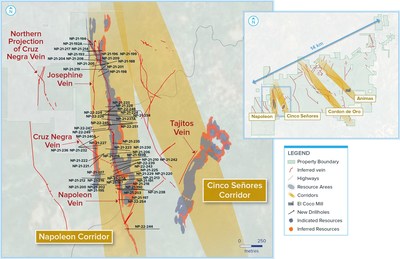 About the Napoleon Vein Corridor results

Drilling continues with five rigs focussed on resource expansion and exploration along the Napoleon Vein Corridor.  31 of today's results are from new drill holes completed within the resource wireframes and not included in the March 2022 resource estimate. (see Table 1).

22 of today's results are new intercepts not included in the initial resource estimate and include multiple results from the Ojo de Agua Zone ("OdA") at the southern end of Napoleon (see Table 2). Significant intercepts in this area include NP-22-260 (9.42 mTW at 484 g/t AgEq), and NP-22-244 (2.1m TW at 468 g/t AgEq), of which the latter is located ~350 metres south of any previous drillhole within the high-grade projected plunge of the Napoleon Vein. Additionally, hole NP-21-238 tested the depth potential at Napoleon, returning 2.37 mTW at 455 g/t AgEq, located ~500 metres below surface, representing the deepest intercept reported to date from the Napoleon Vein Corridor.

In 2021, the Company reported gold rich intervals from shallow drilling in the Ojo de Aqua Zone hosted within quartz-carbonate veins (see Company new release dated August 26, 2021). Intercepts included hole NP-21-150 (2.6 mTW at 3.95 g/t gold and 34 g/t silver) and hole NP-21-153 (1.4 mTW at 6.87 g/t gold and 55 g/t silver).  The Company's improved understanding of the controls on mineralization suggests Ojo de Agua may be the top of the mineralized horizon, and increased grades and widths may be intersected at depth. Drilling has further validated this interpretation, highlighting the Ojo de Agua Zone as a primary target for continued drilling to define the full extent of high-grade mineralization intersected to date.

At Josephine, drilling has defined two primary zones of mineralization, one in the north and another in the south (see Figure 1). Drilling remains ongoing in the central zone beneath these resource areas.  Josephine appears to be a sub-ordinate vein to the main Napoleon Vein and contains high-grade centers surrounded by lower grade mineralization unlike the Napoleon Vein, which has near continuous mineralization grading >150 g/t AgEq along 2,500 metres of strike.

The Company is rapidly growing resources on all three veins within the Napoleon Corridor and expects continued success with its proven exploration model as it infills and expands on these intercepts.

Table 1: Downhole drill intersections from the holes completed along the Napoleon Vein Corridor included in the maiden resource estimate.

Table 2: Downhole drill intersections from the holes completed along the Napoleon Vein Corridor after the maiden resource estimate.

About the Panuco Project

The newly consolidated Panuco silver-gold project is an emerging high-grade discovery located in southern Sinaloa, Mexico, near the city of Mazatlán. The 6,754-hectare, past producing district benefits from over 75 kilometres of total vein extent, 35 kilometres of underground mines, roads, power, and permits.

A technical report is being prepared in accordance with National Instrument 43-101 ("NI-43-101") and will be available on the Company's website and SEDAR within 30 days of the date of the Company's March 1, 2022, news release announcing the resource estimate.

Vizsla Silver is a Canadian mineral exploration and development company headquartered in Vancouver, BC, focused on advancing its flagship, 100%-owned Panuco silver-gold project located in Sinaloa, Mexico. To date, Vizsla has completed over 140,000 metres of drilling at Panuco leading to the discovery of several new high-grade veins. For 2022, Vizsla has budgeted +120,000 metres of resource/discovery-based drilling, designed to upgrade, and expand the maiden resource as well as test other high priority targets across the district.

In accordance with NI 43-101, Martin Dupuis, P.Geo., Vice President of Technical Services, is the Qualified Person for the Company and has validated and approved the technical and scientific content of this news release.

The scientific and technical information in this news release was prepared in accordance with NI 43-101 which differs significantly from the requirements of the U.S. Securities and Exchange Commission (the "SEC"). The terms "measured mineral resource", "indicated mineral resource" and "inferred mineral resource" used in this video are in reference to the mining terms defined in the Canadian Institute of Mining, Metallurgy and Petroleum Standards (the "CIM Definition Standards"), which definitions have been adopted by NI 43-101. Accordingly, information contained in this video providing descriptions of our mineral deposits in accordance with NI 43-101 may not be comparable to similar information made public by other U.S. companies subject to the United States federal securities laws and the rules and regulations thereunder.

This news release includes certain "Forward–Looking Statements" within the meaning of the United States Private Securities Litigation Reform Act of 1995 and "forward–looking information" under applicable Canadian securities laws. When used in this news release, the words "anticipate", "believe", "estimate", "expect", "target", "plan", "forecast", "may", "would", "could", "schedule" and similar words or expressions, identify forward–looking statements or information. These forward–looking statements or information relate to, among other things: the exploration, development, and production at Panuco, including plans for resource/discovery-based drilling, designed to upgrade, and expand the maiden resource as well as test other high priority targets across the district; and the filing of a technical report.

Forward–looking statements and forward–looking information relating to any future mineral production, liquidity, enhanced value and capital markets profile of Vizsla Silver, future growth potential for Vizsla Silver and its business, and future exploration plans are based on management's reasonable assumptions, estimates, expectations, analyses and opinions, which are based on management's experience and perception of trends, current conditions and expected developments, and other factors that management believes are relevant and reasonable in the circumstances, but which may prove to be incorrect. Assumptions have been made regarding, among other things, the price of silver, gold, and other metals; no escalation in the severity of the COVID-19 pandemic; costs of exploration and development; the estimated costs of development of exploration projects; Vizsla Silver's ability to operate in a safe and effective manner and its ability to obtain financing on reasonable terms.

These statements reflect Vizsla Silver's respective current views with respect to future events and are necessarily based upon a number of other assumptions and estimates that, while considered reasonable by management, are inherently subject to significant business, economic, competitive, political and social uncertainties and contingencies. Many factors, both known and unknown, could cause actual results, performance, or achievements to be materially different from the results, performance or achievements that are or may be expressed or implied by such forward–looking statements or forward-looking information and Vizsla Silver has made assumptions and estimates based on or related to many of these factors. Such factors include, without limitation: the Company's dependence on one mineral project; precious metals price volatility; risks associated with the conduct of the Company's mining activities in Mexico; regulatory, consent or permitting delays; risks relating to reliance on the Company's management team and outside contractors; risks regarding mineral resources and reserves; the Company's inability to obtain insurance to cover all risks, on a commercially reasonable basis or at all; currency fluctuations; risks regarding the failure to generate sufficient cash flow from operations; risks relating to project financing and equity issuances; risks and unknowns inherent in all mining projects, including the inaccuracy of reserves and resources, metallurgical recoveries and capital and operating costs of such projects; contests over title to properties, particularly title to undeveloped properties; laws and regulations governing the environment, health and safety; the ability of the communities in which the Company operates to manage and cope with the implications of COVID-19; the economic and financial implications of COVID-19 to the Company; operating or technical difficulties in connection with mining or development activities; employee relations, labour unrest or unavailability; the Company's interactions with surrounding communities and artisanal miners; the Company's ability to successfully integrate acquired assets; the speculative nature of exploration and development, including the risks of diminishing quantities or grades of reserves; stock market volatility; conflicts of interest among certain directors and officers; lack of liquidity for shareholders of the Company; litigation risk; and the factors identified under the caption "Risk Factors" in Vizsla Silver's management discussion and analysis. Readers are cautioned against attributing undue certainty to forward–looking statements or forward-looking information. Although Vizsla Silver has attempted to identify important factors that could cause actual results to differ materially, there may be other factors that cause results not to be anticipated, estimated or intended. Vizsla Silver does not intend, and does not assume any obligation, to update these forward–looking statements or forward-looking information to reflect changes in assumptions or changes in circumstances or any other events affecting such statements or information, other than as required by applicable law.