Use of this site indicates acceptance of the Privacy Policy and Terms of Use.
The information on this Website is not reliable and not intended to provide tax, legal, or investment advice. Nothing contained on the Website shall be considered a recommendation, solicitation, or offer to buy or sell a security to any person in any jurisdiction.
CEO.CA members discuss high-risk penny stocks which can lose their entire value. Only risk what you can afford to lose.
© 2022 - CEO.CA Technologies Ltd.
@newswire/voyager-digital-partners-with-football-star-rob-gronkowski ↻
0 online
Today This week
Search Subscribe
Members of @newswire/voyager-digital-partners-with-football-star-rob-gronkowski

NEW YORK, Sept. 8, 2021 /CNW/ - Voyager Digital Ltd. ("Voyager" or the "Company") (TSX: VOYG) (OTCQX: VYGVF) (FRA: UCD2) the fastest-growing, publicly traded cryptocurrency platform in the United States, announced a market-leading partnership with four-time Super Bowl champion and the greatest tight end in history, Rob Gronkowski (Gronk). Gronk will become a brand ambassador, Voyager shareholder, and holder of the Voyager Token, VGX, which recently completed one of the largest token swaps in history and powers the Voyager Loyalty Program. Starting today, Gronk and Voyager are launching a series of campaigns designed to bring crypto investing to the mainstream--making it accessible, useful, engaging, and entertaining.

"Rob Gronkowski is a great athlete, and an even greater human being. He's someone we all want to be friends with," said Stephen Ehrlich, CEO and Co-founder of Voyager. "I can't think of a better person to have as our brand ambassador. When people hear something from Gronk, they know they're getting the real deal. We also know that by working with Gronk, we are going to get our message out there and have a lot of fun."

"The Voyager app is so easy to use right from the start. It has a big selection of over sixty different coins and pays up to 12% annual rewards, depending on the coins you hold," said Rob Gronkowski. "When I looked at the competition, it seemed like a no-brainer. Together, Voyager and I are bringing crypto to everyone."

In March, Gronk was the first professional football player to launch his own series of NFTs on the Ethereum blockchain featuring his iconic Super Bowl moments. Now, Gronk and Voyager have reached a deal which will make Gronk Voyager's brand ambassador. As a result of the agreement, Gronk now has a stake in Voyager and will be participating in the Voyager Loyalty Program through his ownership of the Voyager Token, VGX.

Today, Gronk and Voyager kick off the first of a series of campaigns across various social media channels, including Twitter and Instagram. The premier campaign is called "New Best Friend" and features Gronk going about his day with a dog that most notably is not his well-known French bulldog, Ralphie. Instead, Gronk is playing in the yard, watching movies, and paddling around the pool with a Shiba Inu, the dog breed closely associated with Dogecoin and the Shiba Inu coin, meant to symbolize crypto in general. Voyager created the campaign with Omnicom's digital agency Organic.

Gronk and Voyager will be releasing additional videos, including "Crypto Clues" later in the year, as well as hosting a livestream event, and releasing an NFT through Voyager for Good to benefit the Gronk Nation Youth Foundation.

This partnership is a continuation of a series of professional sports relationships Voyager is putting together. In June, the company announced a sponsorship deal and partnership with NASCAR driver and crypto enthusiast Landon Cassill that was paid entirely in cryptocurrency. In July, Voyager added the Shiba Inu coin to the hood of Cassill's race car following an uprising in demand from that coin community engaging online with Voyager and Cassill.

About Voyager Digital Ltd.
Voyager Digital Ltd. (TSX: VOYG; OTCQX: VYGVF; FRA: UCD2) is the fast-growing, publicly traded cryptocurrency platform in the United States founded in 2018 to bring choice, transparency, and cost efficiency to the marketplace. Voyager offers a secure way to invest and trade in over 60 different crypto assets, with zero commissions, using its easy-to-use mobile application, and earn rewards up to 12 percent annually on more than 30 cryptocurrencies. Through its subsidiary Coinify ApS, Voyager provides crypto payment solutions for both consumers and merchants around the globe. To learn more about the company, please visit https://www.investvoyager.com.

The TSX has not approved or disapproved of the information contained herein. 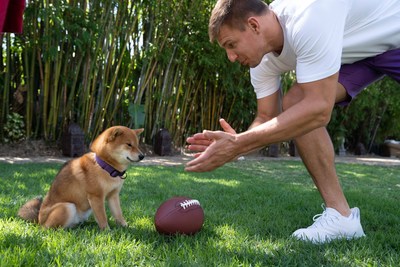