Use of this site indicates acceptance of the Privacy Policy and Terms of Use.
The information on this Website is not reliable and not intended to provide tax, legal, or investment advice. Nothing contained on the Website shall be considered a recommendation, solicitation, or offer to buy or sell a security to any person in any jurisdiction.
CEO.CA members discuss high-risk penny stocks which can lose their entire value. Only risk what you can afford to lose.
© 2016 - Pacific Website Company Inc.
@newswire/wallbridge-exploration-drilling-intersects-2700-gt ↻
0 online
Today This week
Search Subscribe
Members of @newswire/wallbridge-exploration-drilling-intersects-2700-gt

TORONTO, Oct. 21, 2019 /CNW/ - Wallbridge Mining Company Limited (TSX:WM, FWB: WC7) ("Wallbridge" or the "Company") is pleased to announce assay results from the ongoing 70-80,000-metre 2019 drill program, which is continuing to follow up the Area 51 and Tabasco discoveries and outline a large gold system at its 100%-owned Fenelon Gold Property ("Fenelon" or the "Property"). 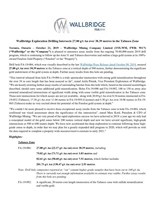 Drill hole FA-19-086, which was visually described in the last Wallbridge Press Release dated October 09, 2019, assayed 27.00 g/t Au over 38.39 metres in the Tabasco zone at a vertical depth of 500 metres, further demonstrating the significant gold endowment of the gold system at depth. Further assay results from this hole are pending.

"This interval released from hole FA-19-086 is a truly spectacular intersection with strong gold mineralization throughout the over 38 m core length that has been assayed so far", stated Attila Péntek, Vice President Exploration of Wallbridge. "We are keenly awaiting further assay results of surrounding batches from this hole which, based on the mineral assemblages described, should carry some additional gold mineralization. Holes FA-19-090 and FA-19-092, 100 to 150 m away also returned mineralized intersections of significant width along with some visible gold mineralization in the Tabasco zone. These new intersections for which assays are not yet available,  along with 20.89 g/t Au over 8.54 metres intersected in FA-19-052 (Tabasco), 17.58 g/t Au over 11.04 metres in FA-19-059 (Cayenne) and 5.50 g/t Au over 10.96 metres in FA-19-065 (Tabasco) make us very excited about the potential of the Fenelon gold system at depth."

"We couldn't be more pleased to receive these exceptional assay results from the Tabasco zone in hole FA-19-086, which confirmed our visual assessment about the significance of this intersection", stated Marz Kord, President & CEO of Wallbridge Mining. "We are very proud of the rapid exploration success we have achieved in 2019: a year ago we only had a conceptual model of the gold zones below 200 metres vertical depth and now we have several significant, high-grade intersections at 500 to 600 meters depth. We have now accelerated the deep exploration to continue following these high-grade zones to depth, in order that we may plan for a greatly expanded drill program in 2020, which will provide us with the data required to complete a property wide resource/reserve estimate in early 2021."

Of the six drill rigs currently active on the Property, four are focusing on exploration drilling from surface, doing large-spaced step-outs to define the footprint of the Fenelon gold system and two underground drill rigs are doing more closely spaced drilling of the Tabasco zones and Area 51 near the existing mine workings. A total of over 56,000 metres have been drilled to date in 2019 and the drill program is on track to complete 70-80,000 metres by the end of the year.

Partial assay results for one surface drill hole (FA-19-086) and complete assay results for nine underground holes (for a total of approximately 2,200 metres) of the 2019 exploration drill program are reported in Table 1 and the Figures. Assays, including further results from hole FA-19-086, are pending for 28 surface drill holes and 53 underground holes, for a total of approximately 31,000 metres. The Company's efforts to accelerate the sampling and assaying process has now resulted in faster turn-around time of assay results and we are expecting to release results more regularly.


The Fenelon Gold Property is located proximal to the Sunday Lake Deformation Zone, an emerging gold belt in northwestern Quebec. This major east-west structure in the northern Abitibi greenstone belt hosts the Detour Lake mine, and is very similar to other breaks controlling world-class gold camps in the southern Abitibi, yet it remains underexplored due to thick overburden cover.

At Fenelon, secondary splays of the Sunday Lake Deformation Zone have controlled the emplacement of a significant gold system along the Jeremie Pluton. Historically, exploration has focused on high-grade shear zones hosted in the Main Gabbro, and this where Wallbridge has completed a bulk sample of 33,500 tonnes grading 18.49 g/t gold.

In late 2018, exploration drilling discovered a new geologic setting with extensive, vein network gold mineralization within the pluton, naming it Area 51. The ongoing 70,000-80,000 m drill program is proving the connectivity of Area 51 through the sediment-hosted Tabasco and Cayenne zones to the Main Gabbro and is continuing to expand the footprint and depth extent of the Fenelon gold system.

Wallbridge is establishing a pipeline of projects that will support sustainable + 100,000 -ounce gold production as well as organic growth through exploration and scalability.

The Company is currently developing its 100%-owned Fenelon Gold Property, which is located proximal to the Sunday Lake Deformation Zone, an emerging gold belt in northwestern Quebec with ongoing 70-80,000 m exploration drill program in 2019 and a recently-completed 33,500-tonne bulk sample. Wallbridge is also pursuing additional advanced-stage projects which would add to the Company's near-term project pipeline. Wallbridge is also continuing partner-funded exploration on its large portfolio of nickel, copper, and PGM projects in Sudbury, Ontario, with a focus on its high-grade Parkin project.