Use of this site indicates acceptance of the Privacy Policy and Terms of Use.
The information on this Website is not reliable and not intended to provide tax, legal, or investment advice. Nothing contained on the Website shall be considered a recommendation, solicitation, or offer to buy or sell a security to any person in any jurisdiction.
CEO.CA members discuss high-risk penny stocks which can lose their entire value. Only risk what you can afford to lose.
© 2016 - Pacific Website Company Inc.
@newswire/zacatecas-silver-to-commence-trading-on-tsx-venture ↻
0 online
Today This week
Search Subscribe
Members of @newswire/zacatecas-silver-to-commence-trading-on-tsx-venture

by @newswire on 26 Feb 2021, 08:00
Zacatecas Silver To Commence Trading on TSX Venture Under Symbol ZAC

VANCOUVER, BC, Feb. 26, 2021 /CNW/ - Zacatecas Silver Corp. ("Zacatecas Silver" or the "Company") (TSXV: ZAC) is pleased to announce its common shares will commence trading on the TSX Venture Exchange on March 2, 2021 under the symbol "ZAC".

The Zacatecas Silver property is located in Zacatecas State, Mexico, within the highly prospective Fresnillo Silver Belt, which has produced over 6.2 billion ounces of silver. The company holds 7826 ha (19,338 acres) of ground that is highly prospective for low and intermediate sulphidation silver-base metal mineralization and potentially low sulphidation gold-dominant mineralization.

The property is 25 km south-east of MAG Silver Corp.'s Juanicipio Mine and Fresnillo PLC's Fresnillo Mine. The property shares common boundaries with Pan American Silver Corp. claims and El Orito which is owned by Endeavour Silver. There are four main target areas within the Zacatecas concessions (Figure 1): The Panuco deposit consists of three prominent northwest-southeast trending, southwest dipping veins and vein breccias, that have been collectively traced over a 4 km strike length (Figure 2). Additional vein splays and jogs are present. 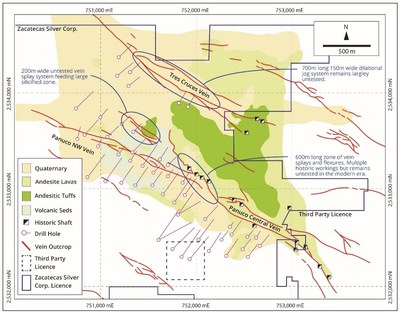 The three veins that were drilled — Panuco NW, Panuco Central and Tres Cruces — remain open at depth and along strike. These are high priority drill targets. A number of sub-parallel veins of shorter strike length, vein splays and dilational jogs are also robust drill targets. The potential strike extension of Panuco Central and Panuco NW under Quaternary cover to the northwest requires further investigation.

Zacatecas Silver plans to immediately complete a 10,000 metre drill program on the vein system outside of the historical resource estimate.

The Muleros vein system is defined by three principal vein structures — the South Vein, the North Vein (Sabino Vein) and the El Rosario Vein (Figure 3). The South and North Veins dip between 55-80° to the southwest and the Rosario Vein dips 70-80° to the northeast. Veins vary from <1 to 5 m in true thickness. The system has a strike length of at least 2.5 km before veins dip under cover the northwest.  Muleros represents a very robust exploration target.

Between 2007 and 2008, a previous operator completed 37 HQ diamond drill holes totalling approximately 6704 m.  The historical drill program was designed to test veins to a vertical depth to about 100 meters and the deeper potential of the system remains untested. With over 2.5 strike kilometres of mapped veins, at least three sub-parallel silver-base metal mineralized veins, and a dilutional area to the NW.

Zacatecas Silver considers the historic shafts to the southeast of Muleros to be highly significant. In this area, there is an extensive cover of recent gravel and vein outcrop is absent. Yet, the historical shafts indicate that the south vein extends at least 1 km to the southeast. This has never been drill tested and is an important exploration target.

Gold grades in several of the historical Muleros drill intercepts are higher than other silver-base metals veins in the area. This may reflect the hybrid intermediate-low sulphidation nature of the Muleros vein system making for an attractive target. 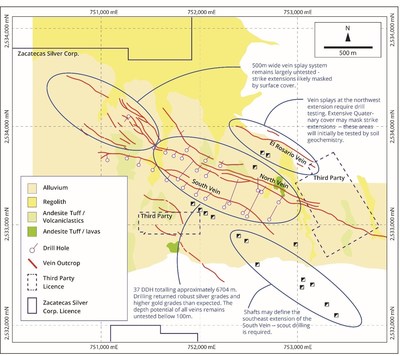 The El Cristo vein system comprises at least 8 northwest-southeast trending, subparallel veins which define a dilational sigmoidal complex that is up to 600 m wide and which coalesces to the northwest and southeast. Veins extend over a strike length of at least 2.5 km (Figure 4). Dip varies from vertical to 60° to the northeast to southwest. El Cristo is the northwest extension of the Veta Grande vein system.

Silver and base metal mineralization is hosted in brecciated veins, and crustiform and colloform banded quartz-carbonate veins, that vary in thickness from 10 cm to 7 m.

In 2010, the previous operator completed 8 HQ diamond drill holes totalling approximately 2854 m. Silver and gold assays were of a moderate tenor — lead and zinc significantly elevated. For this reason, the veins at El Cristo were modelled as the basal part of a low sulphidation epithermal system and not drilled further.

The historical drill holes do not provide an effective test of an epithermal vein system that has a strike length of over 2.5 km, comprises multiple veins over a width of at least 600 m associated with a sigmoidal dilational zone, and is the northwest strike extension of the Veta Grande vein system. Moreover, given the presence of hybrid intermediate-low sulphidation deposit types at Zacatecas, base metal signatures — are not on their own — a reliable indicator of depth in the system.

El Cristo is a significant system with multiple high priority drill targets. The Company is planning an initial orientation drill program of 2500 m ahead of an extensive second phase drill program. 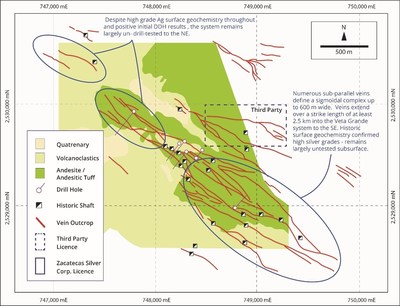 The San Manuel-San Gill target is relatively unexplored. Quartz-carbonate-sulphide veins of between 10 cm to >7 m wide, trend northwest-southeast over a strike length of at least 2 km. Individual veins are between 400 to 1400 m long and splay to the southeast where they intersect a north-south trending hematitic breccia (Figure 5). The breccia has a strike length of approximately 800 m, is up to 40 m wide, and is most likely vertical.

Between 2006 and 2013, the previous operator completed nine HQ diameter diamond drill holes were completed in 2011 for a total of 3176 m.

The north-south orientation of the breccia is highly significant as gold-rich epithermal veins within the district are generally oriented north-south. This is supported by the hole MG 11-01 intersect. Only four holes of the nine drilled at San Manuel targeted the breccia. It is an extremely robust exploration target and significant further work is required.

The Company will immediately commence a soil and rock-chip geochemical program, ahead of a 1,500 metres of diamond drill program. 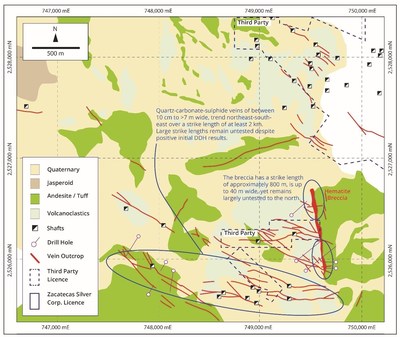 Discovery of silver in the Zacatecas area occurred in 1546. By 1548, the Spaniards had begun production from three mines; the Albarrada Mine on the Veta Grande vein system, and the San Bernabe Mine and Los Tajos Mine on the Mala Noche vein system. By the late 1800's silver from the Zacatecas Mining District accounted for 60% of the value of all Mexican exports making it one of Mexico's wealthiest and largest districts of the era. According to Ponce & Clark (1988), the Mexican Geological Survey estimated that approximately 23,236,499 kg (747,076,679 Troy oz) of silver was produced from the Zacatecas Mining District between 1548 and 1987.

Zacatecas Silver completed its financing prior to filing a prospectus, supported by top institutional investors and mining professionals, and did not raise funds concurrent with this go public event.

Under the Company's last completed financing, Mr. Eric Sprott, through 2176423 Ontario Ltd, a corporation which is beneficially owned by him, holds 2,000,000 shares and is one of the largest shareholders of Zacatecas Silver.

Zacatecas Silver is well funded with over $9 million in cash to carry out an extensive drill program onsite including at the Panuco Deposit, at the Veta Grande vein extension target and on other high priority exploration targets.

As at listing, Zacatecas Silver has 52,362,715 common shares issued and outstanding, no warrants and 5,100,000 incentive stock options.

Zacatecas Silver is led by an experienced team of mining professionals including:

The technical content of this news release has been reviewed, verified and approved by Dr. Chris Wilson, B.Sc (Hons), PhD, FAusIMM (CP), FSEG. Chief Operating Officer and Director of Zacatecas Silver, a qualified person as defined by NI 43-101.

The Company has not done sufficient work to classify the 2019 Panuco Historical Resource as a current mineral resource or mineral reserves, and the Company is not treating the historical estimate as current mineral resources or mineral reserves.  Although the historical resource estimate is considered reliable, 8% of the drill core intervals used in the resource calculations was re-sampled and submitted these to ALS for independent assay. Further, additional data verification including resurveying of select diamond drill holes collars; review of graphic drill core logs, comparison of these logs with remaining half-cut core, and a cross-check of select geological logs agonist database entries; and a check of original ALS assay certificates against the assays and drill hole database. Remodelling of the current Panuco resource is ongoing pending receipt of check sample assays.

Information set forth in this news release contains forward-looking statements that are based on assumptions as of the date of this news release. These statements reflect management's current estimates, beliefs, intentions and expectations. They are not guarantees of future performance. Zacatecas Silver cautions that all forward looking statements are inherently uncertain and that actual performance may be affected by many material factors, many of which are beyond their respective control. Such factors include, among other things: risks and uncertainties relating to Zacatecas Silver's limited operating history, its proposed exploration and development activities on is Zacatecas Properties and the need to comply with environmental and governmental regulations.  Accordingly, actual and future events, conditions and results may differ materially from the estimates, beliefs, intentions and expectations expressed or implied in the forward-looking information. Except as required under applicable securities legislation, Zacatecas Silver does not undertake to publicly update or revise forward-looking information.