Use of this site indicates acceptance of the Privacy Policy and Terms of Use.
The information on this Website is not reliable and not intended to provide tax, legal, or investment advice. Nothing contained on the Website shall be considered a recommendation, solicitation, or offer to buy or sell a security to any person in any jurisdiction.
CEO.CA members discuss high-risk penny stocks which can lose their entire value. Only risk what you can afford to lose.
© 2022 - CEO.CA Technologies Ltd.
@thenewswire/goldseek-intersects-318-gt-gold-over-1208-metres-b884c ↻
0 online
Today This week
Search Subscribe
Members of @thenewswire/goldseek-intersects-318-gt-gold-over-1208-metres-b884c

April 06, 2022 – TheNewswire - London, Ontario – Goldseek Resources Inc. (CSE:GSK) (CNSX:GSK.CN) (OTC:GSKKF) (FSE:4KG) (“Goldseek” or the “Company”) is pleased to announce results from the first five drill holes at the Beschefer Project. BE-22-21 intersected 3.18 g/t Au over 12.08 metres, including 7.24 g/t gold over 2.65 metres, successfully extending the East Zone 30 metres to the west. BE-22-20 was a successful infill hole with 3.2 g/t over 9.05 metres on the eastern strike extent of the Central Shallow Zone. The Beschefer Project is located approximately 30 kilometres southwest of Wallbridge Mining Company Limited’s (“Wallbridge”) Fenelon Gold Project. On March 3rd, 2021, the Company entered into an option agreement on the Beschefer Project to earn 100% over 4 years from Wallbridge (see news release dated March 3, 2021).

Goldseek's President & CEO Jon Deluce states, “We are very excited to announce this step-out hole (BE-22-21) on the East Zone, supporting the expansion potential and our goal of connecting the Central Shallow and East Zones sharing the same structure and mineralization. We believe these first 5 holes were a success hitting gold in 4 of 5 holes, proving the continuity and predictability of the B14 structure. Additionally, results obtained from BE-22-20 represent further strong infill drilling within the Central Shallow Zone, supporting our goal of a maiden resource estimate.

We look forward to the remainder of the results, including 1 hole within the Central Shallow and the majority of our drilling within the East Zone, which continue to hit the mineralized zone with favourable indicators observed over intervals similar to previous holes.”

BE-22-15 was drilled as an infill hole to test the down-dip gold potential of the B14 structure at a vertical depth of about 200 metres. The result obtained of 0.5 g/t over 10 metres is explained by a minor percentage of disseminated pyrite in an albitized host rock. In that location, the thickness of the deformed host rock reaches 30  metres. Compared to surrounding historical holes, this result is part of a progression towards identifying a high-grade gold shoot in this area.

The upper half of the hole cut the Project’s porphyry zone over 200 metres, taking the form of a porphyritic diorite affected by biotite alteration and unevenly cross-cut by quartz veinlet filled stockwork. Scattered results obtained, such as 2.08 g/t over 0.8m, and 0.73 g/t over 2.5m are associated with minor amounts of disseminated pyrite. This creates strong grounds to re-evaluate the potential of this unit which was historically misinterpreted and left partly sampled.

BE-22-20 and BE-22-28 intercepted the B14 structure between 100 and 250 metres vertical depth to validate high-grade holes, infill and extend the mineralized zones.

BE-22-20 was drilled about 20 metres from surrounding holes to fill a gap at the eastern limit of the CSZ. The mineralized interval of 3.02 g/t Au over 9.05 metres consisted of a greyish-beige fine-grain alteration composed of feldspar, carbonate and pyrite. This result reinforces the potential of this area and is open for expansion to the northeast.

BE-22-28, drilled about 15 metres west of historical hole SBJ-06-01 returned 3.3 g/t Au over 4 metres hosted in a high density of deformed carbonate veinlets associated with disseminated pyrite. This hole defines the down-dip limit of the CSZ in this area at about 200 metres in depth.

BE-22-21 was drilled at a 30m NW strike extension of BE12-014 to extend strong historical results and the influence of the East Zone to the west. The mineralized interval of 3.18 g/t Au over 12.08 metres (including 7.24 g/t over 2.65 metres) is centred at a vertical depth of 200 metres. The mineralization is hosted in a similar alteration and mineralization style as BE-22-20. Its location creates opportunities to expand the East Zone to the west and eventually connect with the deeper part of the Central Shallow Zone. 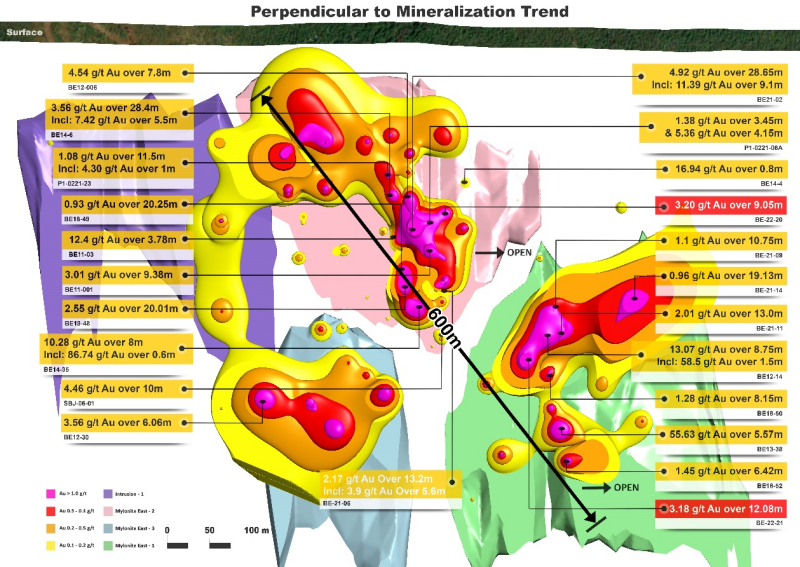 * Stated lengths are core lengths as drilled. True widths are estimated to be between 85% and 100% of reported core length intervals.

** Assays from 6.8 metres of the rushed zone are still outstanding

The program was carried out under the supervision of Martin Demers, P.Geo and a consultant for Goldseek Resources, the qualified person responsible for this news release. The field program was run by SL Exploration with drill core split at the Technominex facility in Rouyn-Noranda. Samples for assaying were sent to AGAT Laboratories for fire assayed with an AA and gravimetric finish. Whole metallic assays are performed on samples greater than 10 g/t gold and samples containing visible gold. Duplicates, standards and blanks were inserted into the sample stream.

This press release was reviewed and approved by Martin Demers, P.Geo,ogq No 770, who is a qualified person as defined under National Instrument 43-101, and responsible for the technical information provided in this news release.

This news release contains certain statements that may be deemed “forward-looking statements” with respect to the Company within the meaning of applicable securities laws, including statements with respect to the Company’s future plans of Beschefer. Forward-looking statements are statements that are not historical facts and are generally, but not always, identified by the words “expects”, “plans”, “anticipates”, “believes”, “intends”, “estimates”, “projects”, “potential” and similar expressions, or that events or conditions “will”, “would”, “may”, “could” or “should” occur. Although the Company believes the expectations expressed in such forward-looking statements are based on reasonable assumptions, such statements are not guarantees of future performance, are subject to risks and uncertainties, and actual results or realities may differ materially from those in the forward-looking statements. Such material risks and uncertainties include, but are not limited to, the Company’s ability to obtain all requisite approvals, including approval of the Canadian Securities Exchange and securities regulatory authorities, if required for a transaction or financing, the Company’s ability to raise sufficient capital to fund its obligations under its property agreements going forward, to maintain its mineral tenures and concessions in good standing, to explore and develop Beschefer or its other projects and for general working capital purposes, changes in economic conditions or financial markets, the inherent hazards associates with mineral exploration, changes in general economic conditions, the ability of the Company to obtain the necessary permits and consents required to explore, drill and develop its projects and if obtained, to obtain such permits and consents in a timely fashion relative to the Company’s plans and business objectives for the projects, changes in environmental and other laws or regulations that could have an impact on the Company’s operations, compliance with environmental laws and regulations, aboriginal title claims and rights to consultation and accommodation, dependence on key management personnel and general competition in the mining industry. Forward-looking statements are based on the reasonable beliefs, estimates and opinions of the Company’s management on the date the statements are made. Except as required by law, the Company undertakes no obligation to update these forward-looking statements in the event that management’s beliefs, estimates or opinions, or other factors, should change.