Use of this site indicates acceptance of the Privacy Policy and Terms of Use.
The information on this Website is not reliable and not intended to provide tax, legal, or investment advice. Nothing contained on the Website shall be considered a recommendation, solicitation, or offer to buy or sell a security to any person in any jurisdiction.
CEO.CA members discuss high-risk penny stocks which can lose their entire value. Only risk what you can afford to lose.
© 2022 - CEO.CA Technologies Ltd.
@thenewswire/guardian-exploration-announces-completion-of-initial ↻
0 online
Today This week
Search Subscribe
Members of @thenewswire/guardian-exploration-announces-completion-of-initial

Calgary, Alberta – TheNewswire - December 13, 2021 - Guardian Exploration Inc. (TSXV:GX) (“Guardian”) is pleased to announce that it has received all geochemical results from its summer work program at its 100% owned Mount Cameron Property, located in the Mayo Mining District, Yukon Territory, Canada.  Early in 2021 Guardian contracted Aurora Geosciences Ltd. (Aurora), based at Whitehorse, Yukon, to perform a desktop study, followed by a helicopter-supported field program focusing on extending known mineralized zones within the project area.

Mineralization at Mount Cameron falls into two categories: structurally controlled polymetallic lead-zinc-silver ± copper (Pb-Zn-Ag ± Cu) veining, and “Manto-style” carbonate replacement Ag-Pb-Zn mineralization (“CRDs”).  The “Cameron” lead-zinc-silver (Pb-Zn-Ag) prospect in the southern property area is an example of polymetallic veining. The “Clark” prospect, located within two claims held by a separate interest but surrounded by the Mount Cameron claim block, is an example of manto-style (CRD) mineralization.  The metallogenic signature of both prospects is similar to that of nearby polymetallic Ag-Pb-Zn deposits within the Keno Hill Silver District.

The Mount Cameron property is underlain mainly by Neoproterozoic Hyland Group quartzite and limestone, lying in contact with Devono-Mississippian Earn group fine clastic rocks in the extreme southern property area (Figure 1). Historic grid soil sampling in 1970 and 1971, northwest of the Clark prospect, identified several Pb-Zn soil geochemical anomalies along or proximal to a contact between limestone and quartzite*.  Historic diamond drilling in 1974, targeting the Cameron prospect in the southern Mount Cameron property area, returned values up to 6.1 meters grading 287.3 g/t Ag, 26.5% Zn, and 5.78% Pb*.  The Cameron prospect occurs along a fault contact, offsetting Hyland Group limestone to the east against quartzites to the west.  Previous workers determined that the fault extends to the north and south beyond the drilled area.

Stratigraphy of the Mount Cameron Property area has undergone NNE-directed faulting determined from historic detailed mapping of the Cameron Prospect area. At the Cameron Prospect, a zone of intense polymetallic brecciation occurs along a NNE trending fault zone within the upper Scougale Creek drainage that exhibits ~140-metres of sinistral movement, offsetting limestone to the east against quartzite to the west. Mineralization along the structure is comprised mainly of galena and sphalerite, with accessory chalcopyrite (copper sulphide), arsenopyrite and pyrite that is estimated to extend for ~300 m, as interpreted from historic work.

Satellite photo interpretation reveals several other north-south to NNE-SSW trending features at the Mount Cameron prospect that may indicate other coeval faults. Historic drilling in 1974 at the Cameron prospect returned significant intervals of Pb-Zn-Ag sulphide mineralization from five of six angle holes (Table 1)*.  It is unknown whether these intervals represent true widths.

In 2021, a single due diligence-style soil geochemical survey line across the Cameron prospect returned moderately elevated Zn and Pb values (Figures 2 and 3), with weakly elevated Ag and Cu values (Figures 4 and 5).  Silt sampling, extending along a stream directly to the west, returned strongly anomalous Zn, Pb and Ag values, and moderately elevated Cu values, for much of its downstream extent.  High Zn, Ag, Cu and Pb values commence roughly 200 metres upstream of the Cameron showing, indicating bedrock-hosted mineralization occurs in this area.  This is interpreted as signifying the southern extension of the Cameron showing. The results also indicate the efficacy of soil and silt geochemical sampling within the Mount Cameron property.

A second significant Ag-Cu-Zn geochemical anomaly was identified along the upper extent of a separate east-flowing drainage about 1.25 km southeast of the Cameron showing.  Strongly anomalous Cu-Zn-Ag values were returned from a short soil sampling traverse extending from the east side of a plateau to the stream headwaters, and from the upper stream course. Values for Zn remain elevated throughout the sampled extent, and include a very high value directly upstream of a confluence in the extreme southeast property area. The mineralogy differs somewhat from the Cameron prospect area, indicated by near-background Pb values.  This indicates the bedrock source differs from the Cameron prospect, and may represent a subset of the polymetallic setting model.

Results from the northwestern soil grid revealed Pb-Zn anomalies of similar tenor to the 1970 survey values.  The 2021 survey returned five consecutive anomalous Zn ± Pb ± Ag values along a 250-metre portion of one NNW soil line, indicating a potentially sizable target.   Numerous other anomalous Zn ± Pb ± Cu values were returned from this area, indicating potential for several mineralized prospects.  The 2021 results confirm the results of earlier workers. The similar stratigraphic and lithological settings to that of the nearby Clark prospect indicate these anomalies may represent manto-style mineralization, rather than polymetallic veins.

“I took the opportunity to join the field crew on site this summer,” says Graydon Kowal, President and CEO of Guardian. “I’m pleased with our progress and optimistic about the potential for this property,” adds Kowal.

All rock, soil and silt samples were labelled, including a sample tag with a unique Sample ID number, and sealed on site with a cable tie to ensure sample quality.  Samples were organized in Mayo and Whitehorse, Yukon by Aurora personnel and delivered in person to the respective analytical labs in Whitehorse.

An early shipment, comprising 3 rock, 16 soil and 29 silt samples, was submitted to the Whitehorse prep laboratory of Bureau Veritas Minerals, an analytical lab with ISO/IEC 17025 certification.  All rock samples underwent crushing so that 80% of material passed through a 2 mm screen, then a 250-gram subsample was pulverized to 75 microns (µm).  All samples underwent aqua regia digestion followed by 34-element “Inductively coupled plasma emission spectroscopy” (ICP-ES) analysis of a 0.5-gram subsample.  All samples also included 50-gram fire assay analysis for gold.  Soil and silt samples were treated identically, commencing with drying to 60oC, followed by sieving to 80 mesh (-180 µm).  Soil samples underwent the same ICP-ES and fire assay analysis as rock samples.

The remaining samples were submitted as a single shipment of 6 rock, 12 silt and 169 soil samples to the Whitehorse prep and analytical lab of ALS Minerals, with ISO/IEC 17025:2017 certification. At the Whitehorse prep lab, all rock samples were weighed, and underwent fine crushing so that 70% of the material could pass through a 2 mm screen.  The resulting crushed material was split by riffle splitter, followed by pulverization of a 250-gram subsample so that 85% could pass through a 75 µm screen.  All samples underwent aqua regia digestion followed by Inductively Coupled Plasma Mass Spectrometry (ICP-MS) analysis of a 25-gram sample for 43 elements including Au.  Soil and silt samples were treated identically, commencing with drying to 60oC, followed by sieving to 80 mesh (-180 µm).  This was followed by aqua regia digestion and “Ultra Trace ICP-MS” analysis of a 0.5-gram subsample for 53 elements, as well as 30-gram fire assay analysis with atomic absorption finish for Au.

This News Release was prepared by Guardian in cooperation with Jesse C. Grady, MSc. Geology, CPG #11592. Jesse C. Grady is a Qualified Person as defined by NI 43-101 and has reviewed the scientific and technical disclosure included in this news release.

* This information is historic in nature and is based on sampling and drilling results reported in 1970 and 1971 by Bullion Mountain Mining Ltd. and in 1974 by Scury-Rainbow Oil Ltd. Guardian believes this information is reliable and relevant as it was completed by reputable companies that use industry standard drilling and sampling practices.   Guardian or its Qualified Person has not done sufficient work to verify this information.

Guardian is a TSX-V listed company (GX) engaged in oil and gas exploration, as well as mineral exploration and development.  Guardian’s first prospect is the Mount Cameron Property located in the Yukon’s Mayo Mining District. 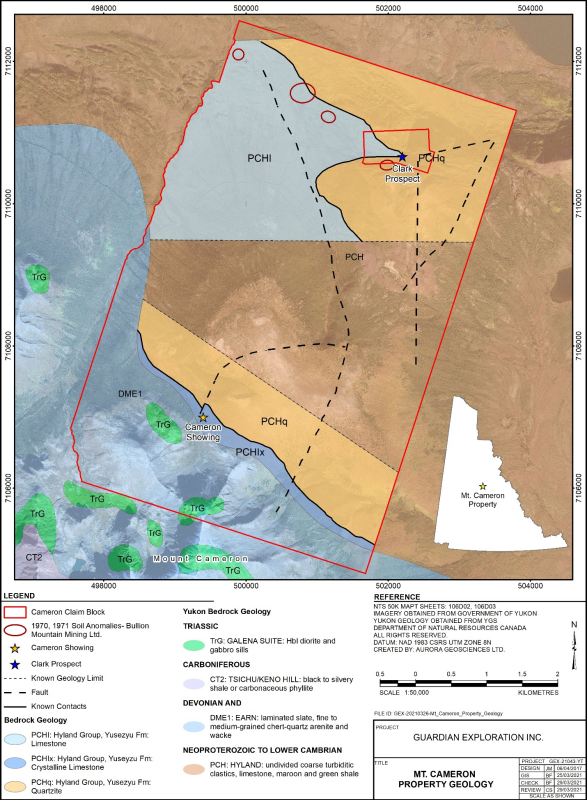 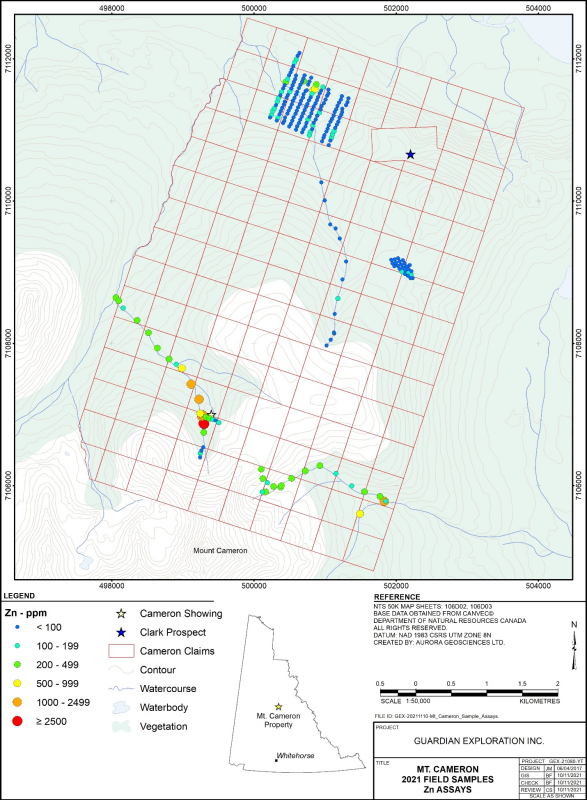 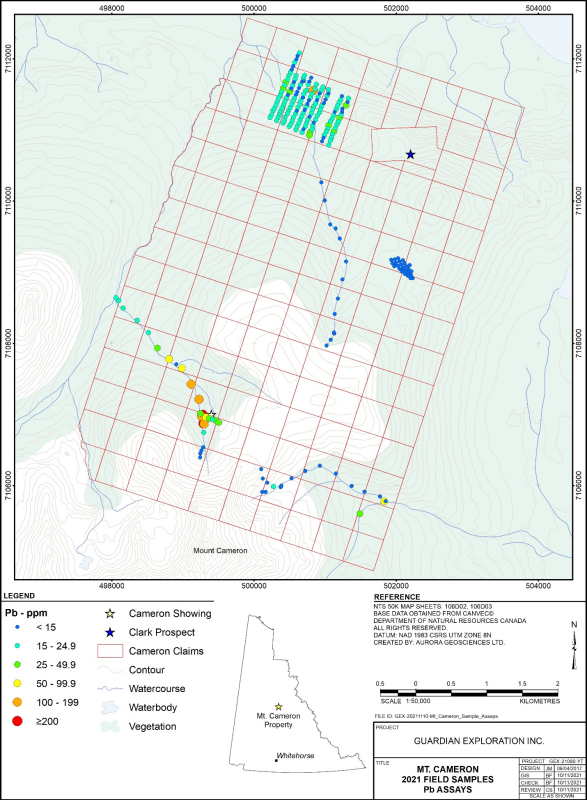 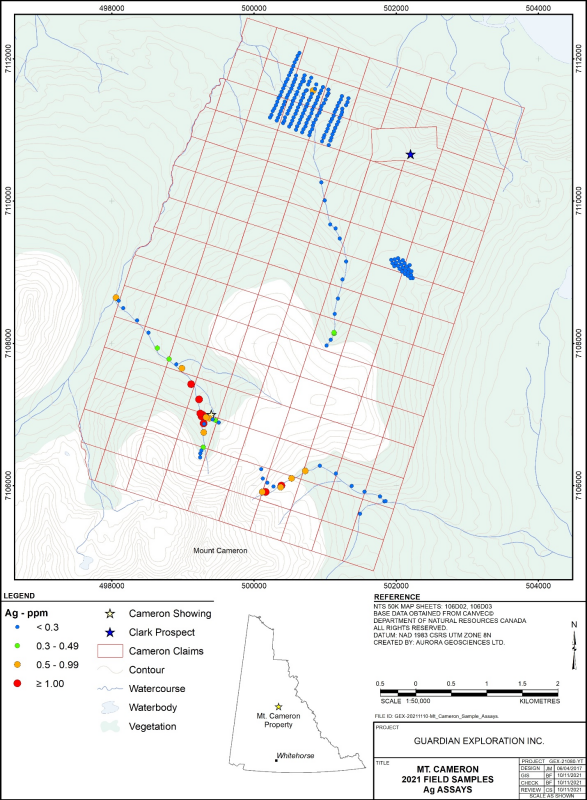 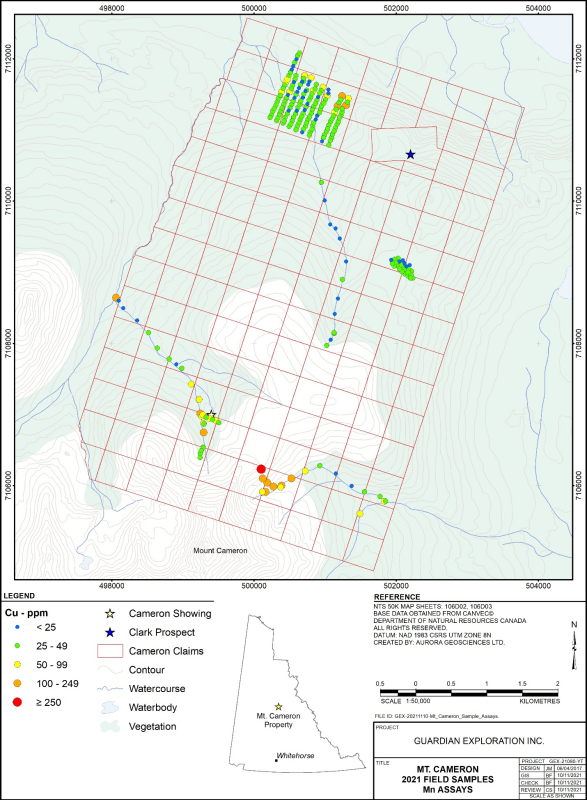