Use of this site indicates acceptance of the Privacy Policy and Terms of Use.
The information on this Website is not reliable and not intended to provide tax, legal, or investment advice. Nothing contained on the Website shall be considered a recommendation, solicitation, or offer to buy or sell a security to any person in any jurisdiction.
CEO.CA members discuss high-risk penny stocks which can lose their entire value. Only risk what you can afford to lose.
© 2022 - CEO.CA Technologies Ltd.
@thenewswire/harvest-gold-initial-drill-program-at-emerson-discovers ↻
0 online
Today This week
Search Subscribe
Members of @thenewswire/harvest-gold-initial-drill-program-at-emerson-discovers

Vancouver, British Columbia / TheNewswire / June 06, 2022 ‑ Harvest Gold Corporation (TSXV:HVG) (“Harvest Gold” or the “Company”) is pleased to provide an update on its recently completed initial drill program at its 100% owned Au-Cu Emerson property.  The 56 km2 Emerson property is in central B.C., 15 km west of Houston B.C. and comprises 14 contiguous mineral claims.  An active railroad, high voltage powerline and gas pipeline are located within or proximal to the property with convenient access by a series of forest service roads.

The Company’s geological consultants, Equity Exploration Consultants Ltd. (“Equity”) have reviewed and modelled results from 2,432 samples collected from 3,017 m of core drilled in seven holes during its initial spring 2022 drill program at Emerson.

Harvest Gold President and CEO, Rick Mark states, “From the outset we believed Emerson had the potential to host (1) Au-Ag mineralization analogous to the Blackwater deposit; and (2) a large porphyry Cu-Au±Mo system analogous to the New Prosperity deposit. This first drill program did not discover evidence of the Au-Ag Blackwater-like system but has uncovered strong evidence for a large porphyry Cu-Au±Mo system. In today’s release we report on results of this drill program and present a plan to follow up on the porphyry target. I would like to thank our entire Harvest Gold team and the outstanding Geologists at Equity for their coordinated efforts and excellent on budget work”.

Henry Awmack, a member of Harvest Gold’s Technical Advisory Board and property co-vendor states, “It appears that the initial diamond drilling cut the top of a porphyry system, with weakly elevated copper-gold-molybdenum values. Especially encouraging is the high Au:Cu ratios intersected within the porphyry body, which ranges from 0.86 to 5.72 (measured as the ratio of Au ppm to percent Cu). This raises expectations that a postulated down-dip mineral system may also be gold-rich.”

Since beginning work at Emerson, Harvest Gold has continually built evidence for a large hydrothermal system. Drilling reported in this release provides further evidence of geologic features characteristic of strong porphyry systems. Specifically, the Emerson prospect is characterized by:

In Figure 5, Harvest Gold presents its plan for additional drilling to test for the stronger mineral system indicated by this initial program. The proposed drilling will test the down-dip continuation of the porphyry system to the west of EMR22-019. Additional holes would be drilled to the north would also explore the northwest continuation of the mineral system. Additional 3D-DC Induced Polarization may be conducted to define the northern extents of the Emerson hydrothermal system.

The results of drilling reported here diminishes Emerson’s potential for hosting significant Au-Ag mineralization analogous to the Blackwater deposit. Gold values ranged from 0.005 ppm to 1.44 ppm within extensive intervals of clay-pyrite alteration encountered by drilling; but were generally below 0.10 ppm.

There were no other significant intersections other than the intervals presented in Figures 2, 3, and 4. Holes EMR22-021 and EMR22-024 were ended prematurely due to difficult drilling in faults. Hole EMR22-022 intersected a few minor intervals of feldspar porphyry intrusions. Hole EMR22-023 drilled into a weakly altered and weakly mineralized feldspar porphyry that did not have the same metal endowment as the intrusions drilled in EMR22-019 and EMR22-020. 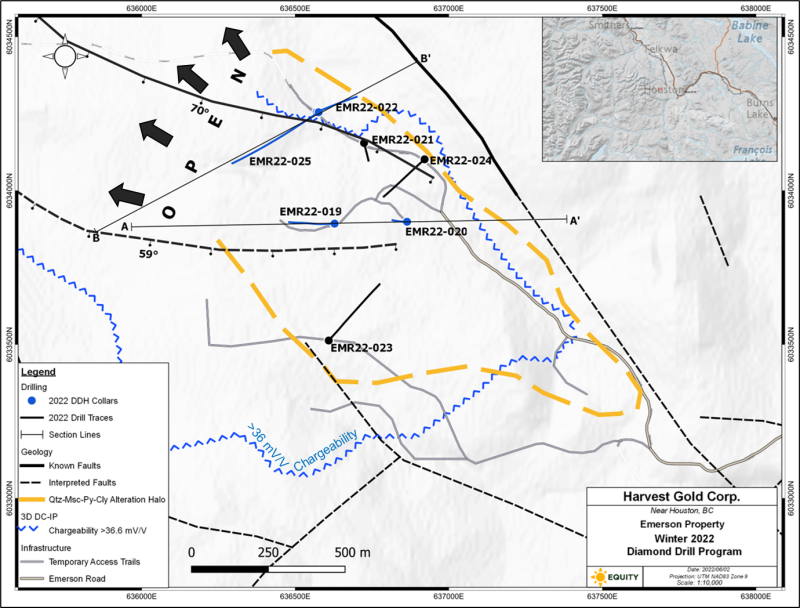 Figure 1: Plan map of the Emerson prospect. Drill collars and traces in blue indicate drill holes presented in cross-sections below. Interpreted quartz-muscovite-pyrite-clay alteration, and chargeability anomaly are all open to the west-northwest. Sections A-A’ and B-B’ are presented in Figures 2, 3, and Figure 4, respectively. 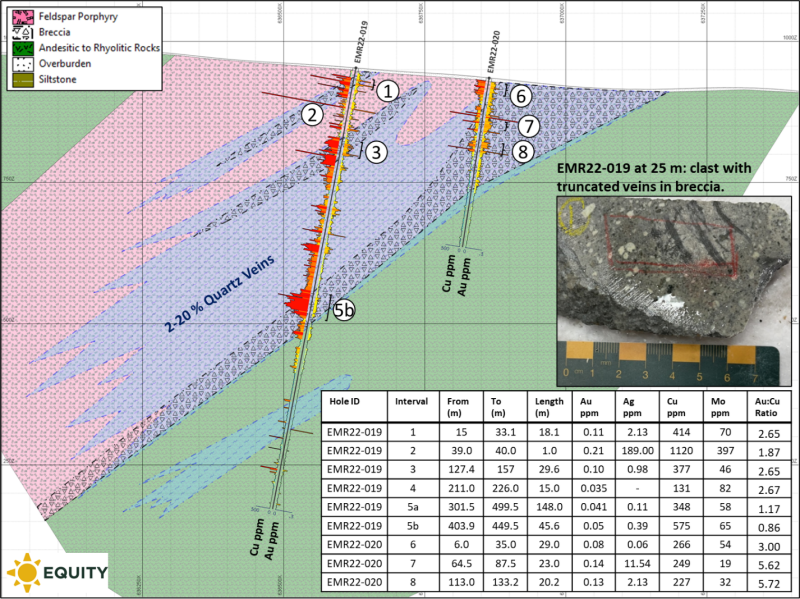 Figure 2: East to West section A-A’ looking north through EMR22-019 and -020. Copper and gold assays shown along drill trace over interpreted geology. Inset photo shows a clast containing mineralized quartz veins within a breccia in interval 1. Au and Cu are seen to be coupled together within the feldspar porphyry with overall higher grades to the west. Au:Cu ratios within mineralized zones are generally above 1:1 and increases to ~2.5:1 in intervals 1 and 3 where truncated veins were seen. Readers should note that intervals are downhole core lengths. True widths are unknown. 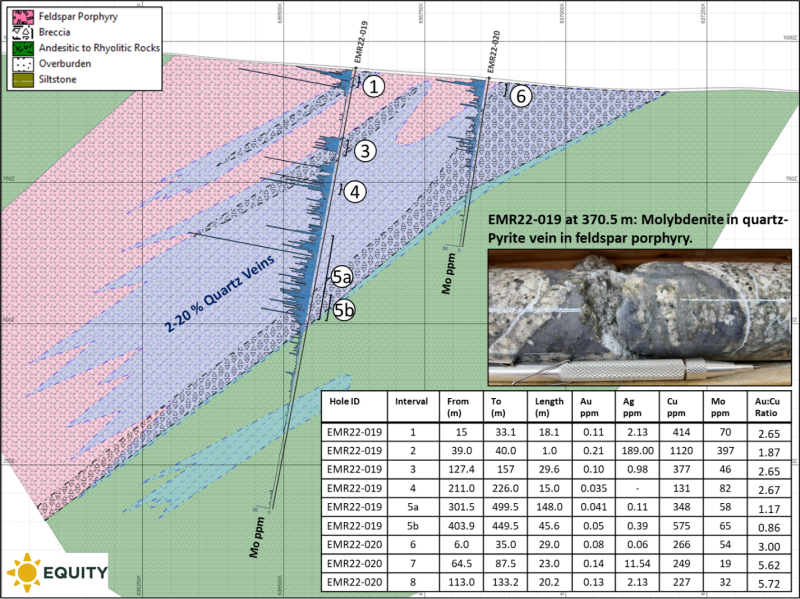 Figure 3: East to West section A-A’ looking north through EMR22-019 and -020. Molybdenum assays shown to the left of the drill trace over interpreted geology. Inset photo shows molybdenite mineralization in a quartz-pyrite vein within interval 5a. Readers should note that intervals are downhole core lengths. True widths are unknown. 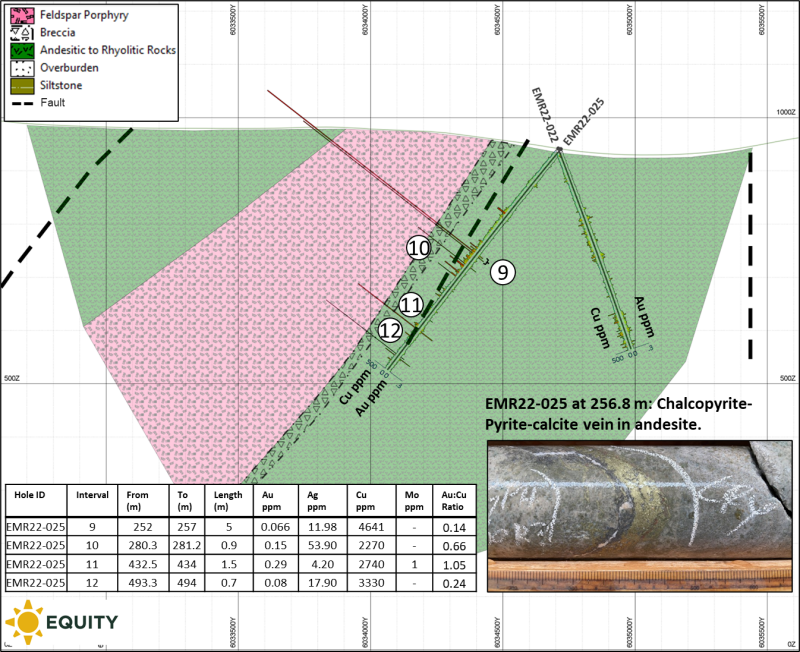 Figure 4: Northeast-Southwest section B-B’ looking northwest through EMR22-022 and-025. Copper and gold assays shown along drill trace over interpreted geology. Inset photo shows a chalcopyrite-pyrite vein within andesite in interval 9. Au:Cu ratios are generally < 1:1 here as this is interpreted to be within the “halo” distal to the porphyry centre. Readers should note that intervals are downhole core lengths. True widths are unknown.

Figure 5: Oblique view of proposed drill holes. Two drill pads are proposed to the west of section A-A’, with two additional holes collared 200 m to the north with intention of testing the mineral system to the northwest. Interpreted feldspar porphyry along section A-A’ is shown as a pink hatch. A) 3D IP chargeability anomaly B) 3D IP Conductivity anomaly.

Table 1: Drill hole locations, azimuth, and dip for the Spring 2022 work program at the Emerson prospect.

All sample assay results have been monitored through the Company's quality assurance / quality control (QA/QC) program. Drill core was sawn in half at Harvest Gold's core logging and processing facility in Houston, B.C. Half of the core was sampled and shipped in sealed and secure bags to the ALS Global preparation facilities in Smithers, B.C. Samples were prepared using standard preparation procedures. Following sample preparation, the pulps were sent to the ALS Global analytical laboratory in North Vancouver, B.C. for analysis.

In addition to ALS Global laboratory QA/QC protocols, Equity implements an internal QA/QC program that includes the insertion of duplicates, standards and blanks into the sample stream.

The disclosure of technical or scientific information in this press release has been reviewed and approved by Warren Bates, P.Geo. Director of Property Investigation for Harvest Gold.  Mr.  Bates serves as a Qualified Person under the definition of National Instrument 43-101, Standards of Disclosure for Mineral Projects of the Canadian Securities Administrators.

Harvest Gold is focused on the Interior Plateau of British Columbia exploring for near surface gold deposits and Copper Gold Porphyry deposits. Harvest Gold’s board of directors, management team and technical advisors have collective geological and financing experience exceeding 400 years.