Use of this site indicates acceptance of the Privacy Policy and Terms of Use.
The information on this Website is not reliable and not intended to provide tax, legal, or investment advice. Nothing contained on the Website shall be considered a recommendation, solicitation, or offer to buy or sell a security to any person in any jurisdiction.
CEO.CA members discuss high-risk penny stocks which can lose their entire value. Only risk what you can afford to lose.
© 2022 - CEO.CA Technologies Ltd.
@thenewswire/stellar-africagold-awarded-52-km2-final-arrete-for ↻
0 online
Today This week
Search Subscribe
Members of @thenewswire/stellar-africagold-awarded-52-km2-final-arrete-for

Vancouver – TheNewswire - December 14, 2021 – J. François Lalonde, President and Chief Executive Officer of Stellar AfricaGold Inc., (TSXV:SPX) (OTC:STLXF) ("Stellar" or the "Company") is pleased to announce that Stellar has been awarded the final grant of a 52 km2 exploration permit in southwest Mali.

Stellar, through its 100% subsidiary Stellar Pacific Mali SARL, has secured the final approval for a 52 km2 gold exploration permit in southwest Mali. The Namarana Permit is located near the village of Namarana, Circle of Kangaba, region of Koulikoro, near the border with Guinea approximately 100 km W-SW west of Bamako, the capital.

François Lalonde, President and CEO commented: “We are excited to receive the grant of the full Namarana permit. The encouraging results obtained from Stellar’s 2021 reconnaissance program, which are consistent with past observations and with Newmont’s interpretation of its airborne mag survey, indicate that sites 3 and 4 are close to drill ready. Plans are now underway for a short program of surface trenching early in 2022 to confirm the geological and structural features at those specific locations. Subject to positive results a drill program would follow.”

Background to the Namarana Acquisition

By way of background, in 2018, Stellar’s exploration interest and substantially all its financial resources were focussed on the development of its Balandougou project in Guinea, just across the international boundary from Namarana in Mali.  Although Stellar had acquired the Namarana permit because it was geographically contiguous to and geologically along strike from Balandougou, Stellar did not apply for the renewal of Namarana because Stellar’s management attention and financial resources were committed to Balandougou. However, the Namarana area remains as geologically interesting now as it was then, and with Stellar refocussing on exploration and in a stronger financial position, Namarana has once again become an area of considerable interest and in 2020 Stellar was awarded a preliminary ‘look-see’ exploration authorization for Namarana.

In 2012 Newmont Mining, in association with Stellar, conducted a field reconnaissance and an airborne magnetic survey over the original 132 km2 Namarana permit owned by Stellar Pacific Mali SARL. The motives and the objectives of this geophysical survey was the interpretation of the local geology. All of this historical data was retained by Stellar.

In December 2020 Stellar’s local geologist conducted a field visit to the newly awarded Namarana exploration authorization. Within a 52 km2 area of interest Stellar’s geologist reported 4 producing artisanal gold mines sites and observed exposed gold-bearing quartz veins extending along geological and geophysical structures consistent with the 2012 Newmont-Stellar field work. During the 2012 geophysical survey Newmont reported 4 significant grab sample assay results (48.4 g/t Au, 1.33 g/t Au, 2.16 g/t Au, and 1.14 g/t Au) taken from quartz veins in the northern-most artisanal mine sites. These sites, labelled numbers 3 and 4 on the figure below, is at the contact of a small diorite intrusion clearly visible on the magnetic survey and is a priority target for Stellar.

During the summer, 2021 Stellar conducted a follow-on reconnaissance program to further evaluate the gold potential of the Namarana area prior to filing an application for a full Exploration Permit over the same area. The entire 51 km2 was visited by Stellar’s senior consultant geologists, and within the Permit area 11 artisan mine sites were visited, mapped and sampled. (See mine sites location figure below) 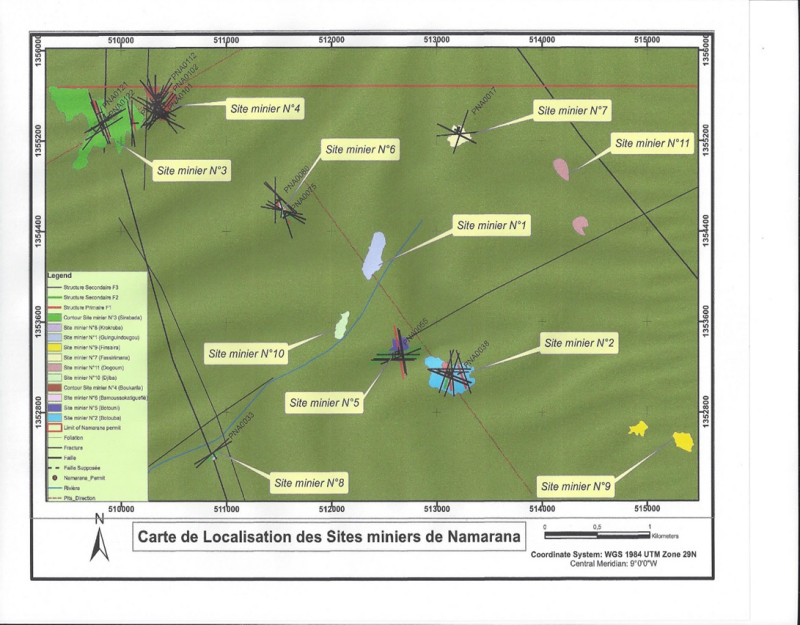 A total of 172 grab samples were taken and sent to SGS Bamako laboratory for fire assay analysis. Twenty-five (25) samples returned gold grades greater than 0.30 g/t Au and 13 returned grades ranging between 1.0 g/t Au and 5.7 g/t Au primarily in some quartz veins running roughly north south. The samples were taken from either surface exposures or from below ground inside some of the artisan mine pits to as deep as 6 metres in quartz vein systems exposed by the artisan mining activity.

Mine sites 3,4,5 and 2 were considered priority as they all show primary mineralisation in quartz veins, some quartz veins still outcropping while others were observed at depth in artisanal pits. Although all surface showings and underground quartz veins had been extensively mined by orpailleurs, all 13 samples grading between 1.23 g/t Au and 5.70 g/t Au were taken at those 4 sites.

The Company maintains offices in Vancouver, BC and in Montreal, QC and has a representative office in Casablanca, Morocco. Stellar’s principal exploration project is the Tichka Est Gold Project in the Atlas Mountains of Morocco.

Stellar’s President J. President François Lalonde can be contacted at 514-994-0654 or by email at lalondejf@stellarafricagold.com.

The technical content of this press release has been reviewed and approved by M. Yassine Belkabir MScDIC, CEng, MIMMM, a Stellar director and a Qualified Person as defined in NI 43-101.

On Behalf of the Board

The CSE has neither approved nor disapproved the contents of this news release. Neither the CSE nor its Market Regulator (as that term is defined in the policies of the CSE) accepts responsibility for the adequacy or accuracy of this release.

This release contains certain "forward-looking information" under applicable Canadian securities laws concerning the Arrangement. Forward-looking information reflects the Company’s current internal expectations or beliefs and is based on information currently available to the Company. In some cases forward-looking information can be identified by terminology such as "may", "will", "should", "expect", "intend", "plan", "anticipate", "believe", "estimate", "projects", "potential", "scheduled", "forecast", "budget" or the negative of those terms or other comparable terminology. Assumptions upon which such forward-looking information is based includes, among others, that the conditions to closing of the Arrangement will be satisfied and that the Arrangement will be completed on the terms set out in the definitive agreement. Many of these assumptions are based on factors and events that are not within the control of the Company, and there is no assurance they will prove to be correct or accurate. Risk factors that could cause actual results to differ materially from those predicted herein include, without limitation: that the remaining conditions to the Arrangement will not be satisfied; that the business prospects and opportunities of the Company will not proceed as anticipated; changes in the global prices for gold or certain other commodities (such as diesel, aluminum and electricity); changes in U.S. dollar and other currency exchange rates, interest rates or gold lease rates; risks arising from holding derivative instruments; the level of liquidity and capital resources; access to capital markets, financing and interest rates; mining tax regimes; ability to successfully integrate acquired assets; legislative, political or economic developments in the jurisdictions in which the Company carries on business; operating or technical difficulties in connection with mining or development activities; laws and regulations governing the protection of the environment; employee relations; availability and increasing costs associated with mining inputs and labour; the speculative nature of exploration and development; contests over title to properties, particularly title to undeveloped properties; and the risks involved in the exploration, development and mining business. Risks and unknowns inherent in all projects include the inaccuracy of estimated reserves and resources, metallurgical recoveries, capital and operating costs of such projects, and the future prices for the relevant minerals.