Use of this site indicates acceptance of the Privacy Policy and Terms of Use.
The information on this Website is not reliable and not intended to provide tax, legal, or investment advice. Nothing contained on the Website shall be considered a recommendation, solicitation, or offer to buy or sell a security to any person in any jurisdiction.
CEO.CA members discuss high-risk penny stocks which can lose their entire value. Only risk what you can afford to lose.
© 2022 - CEO.CA Technologies Ltd.
@thenewswire/stellar-secures-four-new-exploration-permits-and-continues ↻
0 online
Today This week
Search Subscribe
Members of @thenewswire/stellar-secures-four-new-exploration-permits-and-continues

Montreal – TheNewswire - January 11, 2022– Stellar AfricaGold Inc., (TSXV:SPX) (OTC:STLXF) ("Stellar" or the "Company") is pleased to announce that it has secured four additional exploration permits in the immediate vicinity of its recent gold discovery at Tichka Est in Morocco and is commencing exploration of the newly acquired ground.

Stellar and ONYHM (the Moroccan Office Nationale des Hydrocarbures et des Mines), have signed a January 11, 2022 addendum to the August 18, 2020 Tichka-Est 90-percent earn-in exploration agreement adding four new exploration permits and increasing the total to seven permits with a surface footprint of 82 square kilometers. Two of the four additional permits are strategically located in relation to the two gold structures A and B recently discovered by Stellar’s extensive prospecting and trenching programs. See permits map below. 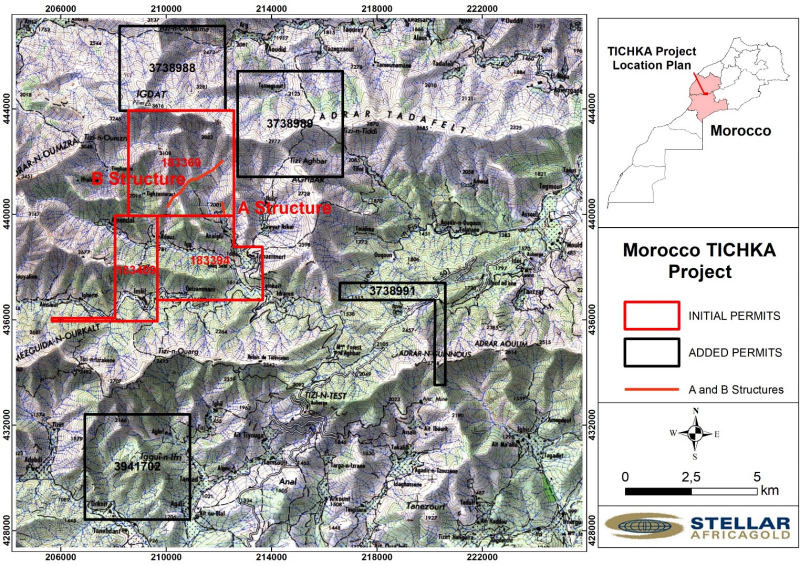 Stellar director Yassine Belkabir of Casablanca, Morocco and the African Bureau of Mining Consultants provided all necessary assistance in the negotiation and closing of the August 18, 2020 Tichka earn-in agreement with ONHYM, and provided essential transaction facilitation with respect to January 11, 2022 Tichka addendum.

With the addition of these four permits to the Tichka-Est Gold Project, Stellar is immediately commencing exploration on the new highly prospective ground. Historically, the first gold in the Tichka area was discovered following a stream sediment survey program, and Stellar is initiating an extensive stream sediments sampling program focussing initially on the creek and river networks of permits #3738988 and #3738989 where structures similar to Zones A and B have been observed. Additionally, in new permit #3738989, five new trenches will be excavated across an indentified structure which runs NW-SE and shows quartz-ankerite-sulphide filling. This new structure is just to the north-east of Trench 6-B which sampled 3.4 g/t Au over 17 metres including 9.55 g/t Au over 4 metres.

About the Tichka Est Gold Project

The Zone A structure consists of a steeply dipping NNW-SSE striking shear zone that was traced on surface for about 500 meters along strike. The shear zone is strongly brecciated and is injected with quartz carbonate (Ankerite) veins and swarms of veinlets running near and parallel to the intrusive contact with a micro-granitic porphyry dyke. It is mineralized with disseminated and locally semi-massive pockets of pyrite and arseno-pyrite.

The Zone B structure is located approximately 3.0 km north of the village of Analghi. The trenches across Zone B exposed a wide brecciated fault zone running ENE-WSW in a highly deformed, altered and fractured sedimentary sequence more precisely at the contact of a greenish schist of volcanic origin to the North and of a greyish siltstone to the south. The wide sheared structure is also injected with gold mineralized quartz-carbonate veins and veinlets containing disseminated and locally semi-massive pockets of pyrite and arseno-pyrite.

Trench Locations Zone A and B 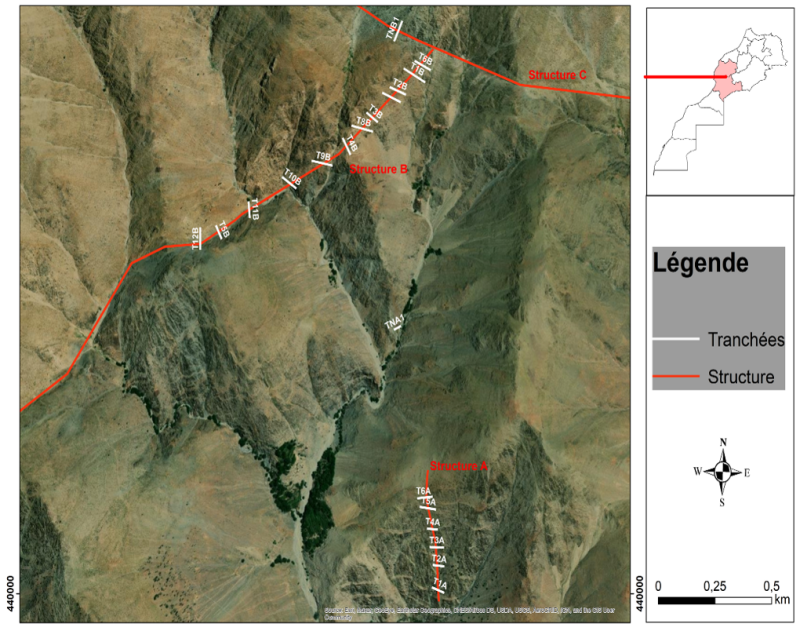 The Company maintains offices in Vancouver, BC and in Montreal, QC and has a representative office in Casablanca, Morocco.

Stellar’s principal exploration project is its gold discovery at the Tichka Est Gold Project, a grouping of seven permits covering an area of 82 km2. The Tichka Est Property lies within the High Atlas Western Domain about 80 km SSW of the city of Marrakech. The area is accessible year-round by road to the village of Analghi located near the mineralized gold zone. Stellar also holds the Namarana Gold Project in Mali and three permits pending in Côte d’Ivoire.

The technical content of this press release has been reviewed and approved by M. Yassine Belkabir MScDIC, CEng, MIMMM, a Stellar director and a Qualified Person as defined in NI 43-101.

Stellar’s President J. François Lalonde can be contacted at 514-994-0654 or by email at lalondejf@stellarafricagold.com.

Additional information is available on the Company’s website at www.stellarafricagold.com.

On Behalf of the Board

This release contains certain "forward-looking information" under applicable Canadian securities laws concerning the Arrangement. Forward-looking information reflects the Company’s current internal expectations or beliefs and is based on information currently available to the Company. In some cases forward-looking information can be identified by terminology such as "may", "will", "should", "expect", "intend", "plan", "anticipate", "believe", "estimate", "projects", "potential", "scheduled", "forecast", "budget" or the negative of those terms or other comparable terminology. Assumptions upon which such forward-looking information is based includes, among others, that the conditions to closing of the Arrangement will be satisfied and that the Arrangement will be completed on the terms set out in the definitive agreement. Many of these assumptions are based on factors and events that are not within the control of the Company, and there is no assurance they will prove to be correct or accurate. Risk factors that could cause actual results to differ materially from those predicted herein include, without limitation: that the remaining conditions to the Arrangement will not be satisfied; that the business prospects and opportunities of the Company will not proceed as anticipated; changes in the global prices for gold or certain other commodities (such as diesel, aluminum and electricity); changes in U.S. dollar and other currency exchange rates, interest rates or gold lease rates; risks arising from holding derivative instruments; the level of liquidity and capital resources; access to capital markets, financing and interest rates; mining tax regimes; ability to successfully integrate acquired assets; legislative, political or economic developments in the jurisdictions in which the Company carries on business; operating or technical difficulties in connection with mining or development activities; laws and regulations governing the protection of the environment; employee relations; availability and increasing costs associated with mining inputs and labour; the speculative nature of exploration and development; contests over title to properties, particularly title to undeveloped properties; and the risks involved in the exploration, development and mining business. Risks and unknowns inherent in all projects include the inaccuracy of estimated reserves and resources, metallurgical recoveries, capital and operating costs of such projects, and the future prices for the relevant minerals.