Use of this site indicates acceptance of the Privacy Policy and Terms of Use.
The information on this Website is not reliable and not intended to provide tax, legal, or investment advice. Nothing contained on the Website shall be considered a recommendation, solicitation, or offer to buy or sell a security to any person in any jurisdiction.
CEO.CA members discuss high-risk penny stocks which can lose their entire value. Only risk what you can afford to lose.
© 2016 - Pacific Website Company Inc.
@newswire/nighthawk-expands-drilling-at-colomac-zones-20-and ↻
0 online
Today This week
Search Subscribe
Members of @newswire/nighthawk-expands-drilling-at-colomac-zones-20-and Nighthawk's exploration strategy has evolved since the initial drill program at Zone 2.0 (see press release dated June 20, 2012), where the focus is now on the discovery and delineation of higher-grade shoots within the sill. All 38 drillholes reported to-date (12,824 metres) of the planned 35,000 metre to 40,000 metre drill program for 2019, have intersected mineralization. The success in locating and tracing new areas of higher-grade mineralization along the Colomac Main sill continues to validate the Company's belief in the deposit's capacity to host discrete corridors of elevated grade (typically significant widths of over 2.0 gpt with internal higher-grade cores), some of which are broad domains of contiguous mineralization along strike and to depth that remain largely unexplored. This exploration strategy has been extremely successful leading to several new discoveries and is considered crucial to resource growth going forward.

Dr. Michael Byron, President and Chief Executive Officer said, "This latest drilling followed-up on recent discoveries of higher-grade mineralization in Zones 2.0 and 3.0. Our goal was to extend these known occurrences down-plunge and to test other highly prospective opportunities. Outcomes have been exceptional, resulting in a new discovery in Zone 2.0 and the successful expansion of three previous discoveries. We are extremely encouraged by our continued success in identifying new prospects and remain confident in our ability to track them along strike and to depth. This part of the sill has seen limited exploration to-date but clearly shows the potential to deliver ounces.

"Our three drills have been in operation since early March and we are on track to meet and/or exceed our 2019 planned meterage. As well, with our field exploration program now in full swing, we are expecting this to be our most productive exploration campaign to-date."

Nine holes were recently drilled within the south-central portion of Zone 2.0 to test for new areas of strong mineralization, to explore the plunge projection of previous drilled higher-grade areas, and to infill gaps in near-surface drill coverage (see press release dated June 26, 2019). All holes intersected broad zones of mineralization exhibiting strong continuity. Hole C19-19, the most northern of the nine holes (Figure 1), tested a new area to depth below a historical vertical hole, and intersected extensive mineralization 200 metres below surface returning 60.75 metres of 2.61 gpt Au, including 13.40 metres of 4.45 gpt Au, and including 7.75 metres of 6.85 gpt Au (Figure 2). The higher-grade core to the intercept may indicate the presence of a plunging shoot similar to Zone 1.5.

Hole C19-18 was drilled 50 metres southwest of the C19-19 series holes below shallow historical drilling to explore an area that had never been tested to depth (Figure 1). The hole encountered a broad zone of higher-grade mineralization to a depth of 320 metres that assayed 91.50 metres of 1.33 gpt Au, including 24.75 metres of 2.95 gpt Au, 14.25 metres of 4.55 gpt Au, and 9.25 metres of 6.44 gpt Au (Figure 3). This represents a new discovery in this part of the sill that remains open in all directions. Additional drilling is being planned to follow-up on this discovery.

Zone 3.0 remains largely underexplored; however five holes were recently drilled to follow-up on some earlier promising higher-grade intersections (see press release dated May 28, 2019). This resulted in the expansion of the zone northward and to new depths where it remains open below 250 metres. Recently completed holes C19-23, 23B, and 23C were collared 50 metres north of previous holes C19-07, 07B, and 07C within the northern part of the zone to track projected mineralization down-plunge as highlighted by hole C19-07 intersection of 35.45 metres of 2.14 gpt Au, including 10.95 metres of 3.90 gpt Au, and including 2.75 metres of 8.17 gpt Au (see press release dated May 28, 2019). All three of the C19-23 series holes occur north of a cross fault defined by a recently completed LIDAR survey and intersected mineralization; however, they did not encounter similar widths and intensity of mineralization as reported for the C19-07 holes located south of the fault. 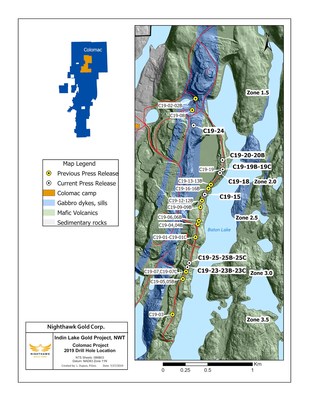 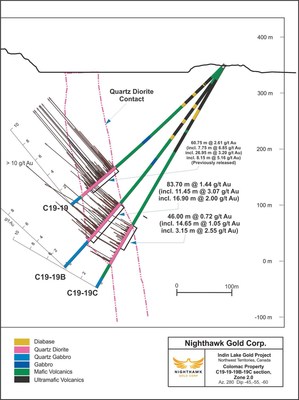 This news release contains "forward-looking information" within the meaning of applicable Canadian securities legislation. Forward-looking information includes, but is not limited to, information with respect to the Company's continued exploration programs (including size and budget) and the ability to advance targets and the timing and results thereof; the ability to expand the current resource at Colomac with additional drilling and the ability to discover and define new higher-grade gold zones including any impact on the overall grade. Generally, forward-looking information can be identified by the use of forward-looking terminology such as "plans", "expects", or "does not expect", "is expected", "budget", "scheduled", "estimates", "forecasts", "intends", "anticipates", or "does not anticipate", or "believes" or variations of such words and phrases or state that certain actions, events or results "may", "could", "would", "might", or "will be taken", "occur", or "be achieved".